One Year Ago Today...

When I visited her yesterday, she said she never intended to live so long. I told her I doubted anyone did, but I was certainly glad for every day that she's in my life.

I visited her again today (she lives 15 minutes away, so it's not that hard) and then I had lunch with a friend. When I came home, I found a note saying a florist had tried to deliver flowers. I called the florist and told him to deliver the flowers to my mother directly. Then I asked who had sent the flowers.

The florist checked. They were sent by the president of a organization where my mother gets a pension. I said, Wow.

I called my brother and told him the story. He said Wow. Then I pointed out he'll be getting a pension from the same organization, so they'll send him flowers when he turns 101. He said that gave him reason to live.

Since you probably want to see the difference between 100 and 101, here's a picture I took yesterday. For some reason, she didn't feel like getting out of bed. 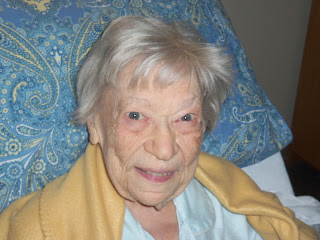 When I got there today, she was in exercise class, She also had a haircut yesterday afternoon, but she had an emergency shampoo this morning. 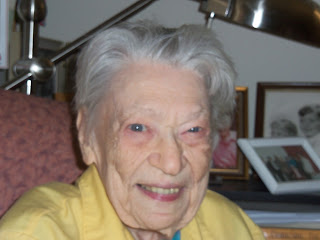 Oh yeah. I have rewrites to do on The Shade Of The Moon, but they can wait. Today is for celebrating my mother's long and wonderful life!

Three cheers for your mom!

Congrats and I'm glad you are back. Checked here ever couple of days hoping you would write some thing, but knew you wouldn't cause family is important.

Happy Birthday to your mom! I hope to see an entry like this next year for 102!

Thank you Glen and jessiemc82 and Lisa-Marie Jordan-

I'll pass along your birthday greetings when I see my mother this weekend (and I hope I'll see what the flowers look like!).

that's wonderful! best wishes to her enjoying the day and every day afterwards.

That is wonderful news! Happy Birthday to your mother. I haven't been on the blog for awhile because I gave birth to twin boys in July, but I was just wondering about how you and your mother were doing the other day and decided to check in. Hope all is well!