I don't care because when I got home this afternoon from getting my hair cut and visiting with my mother, I found an unexpected check in the mail.

Unexpected checks are my absolute favorite things to find in the mail (so much nicer than unexpected bills), but this was a particularly exciting unexpected check because it was my very first royalty check from the Danish version of Life As We Knew It (aka Mens Vi Endnu Er Her*, at least in Denmark).

I've always been particularly fond of Mens Vi Endnu Er Her because it was the first foreign language version of Life As We Knew It, and its advance paid for the party I gave myself in celebration of the publication of The Dead And The Gone, which was my 75th book to be published and therefore worthy of celebration.

Most likely, the royalty check won't pay for any parties, because after commissions, it came to $59.17, which nowadays is dinner for four at Subway, if you get some cookies but no soft drinks. But I don't care, because it was so totally unexpected. 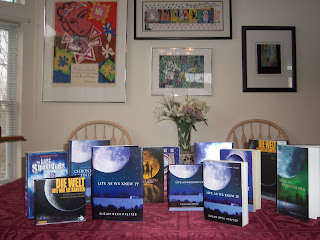 Little Mens Vi Endnu Er Her tends to hide in a corner when I take LAWKI family reunion pictures.

So today, in its honor, I took some pictures of it all by its lovely lonesome. 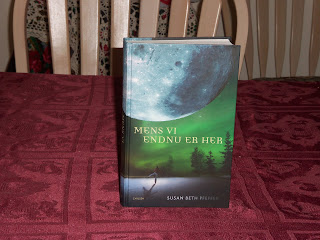 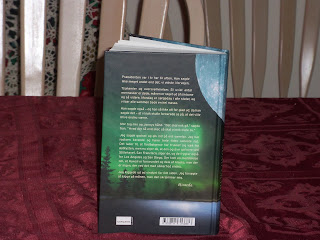 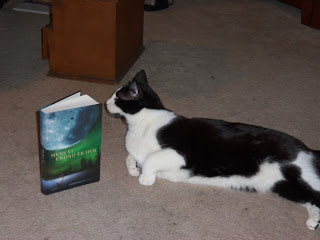 Once Scooter realized that $59.17 could pay for about 100 cans of cat food, he decided it was worth perusing. 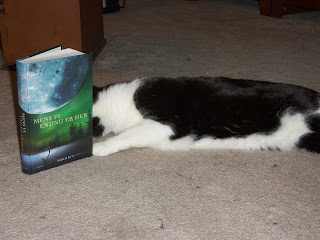 In no time flat, he really got into it.

Now, as long as he doesn't get into the check, I, for one, will be very happy!


*Since I don't speak Danish, I have no idea what this blog review says, but Google was kind enough to translate the last paragraph.


"While we are still here" was a huge surprise to me - the most positive kind. It shows that the science fiction genre is alive and well in youth literature, and that it dares to take liberties with his characters and his stories. It reminded me of a youth version of the letter to Osama.

Enough with the cold and hacking. Time to get all well.

As it will be dark here in a short while, I'll take the liberty of wishing you a happy, latkes-filled Chanukkah.

Personally, I think the fried-food tradition is just the right 'prescription'.

PS As the captcha word is "Yingles," and you received a check, and, borrowing from Magoo's Christmas Carol:

"Yingle, Yingle, coins when they jingle, make such a lovely sound!"

I decorated my apartment with my Chanukah angel and my Chanukah stocking and my various other only at Chanukah decorations yesterday afternoon, and then, of course, last night, I lit the first candles.

Things are definitely festive around here!