I Named Him Scooter 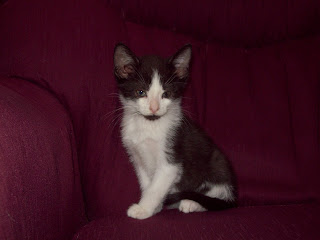 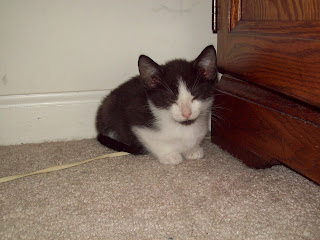 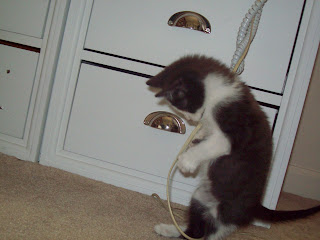 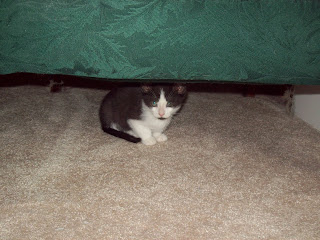 I have a kitten on my lap. After an acquaintanceship of a mere two hours, Scooter understands how important it is to sleep on my lap.
As you can see, he's black and white and has a beard. It makes him look slightly Amish.
Thus far, he's expressed no interest in food or kitty litter, but he sure does love telephone wires. And my lap.
He knows how to purr. And to kvetch, which he did non-stop on the trip home. So maybe he isn't Amish. Maybe he's Chasidic.
If he were wearing a stovepipe hat, he'd look like Abraham Lincoln. But I refuse to believe he's a Republican.
Then again, I find it hard to believe any Republicans would want to sleep on my lap!
ETA: I've added the official portrait to the top of this entry; it has the best view of his beard.
My cousin Fran expressed surprise (perhaps even concern) that Scooter was named for Scooter Libby, which would truly make him a Republican kitty. I hadn't even thought of Scooter Libby when I decided if I got a boy kitten, he'd be named Scooter. He's named for Phil Rizzuto, who may well have been a Republican, but more importantly, was the shortstop and broadcaster for the New York Yankees.
Scooter the cat has discovered the food bowl, but still hasn't explored the delights of the kitty litter. He does love my lap though, and gets agitated when it's in another room without him on it.
He'd better learn to live without it. I'm taking my mother to the dentist tomorrow, and he's not invited!
Posted by Susan Beth Pfeffer at 2:48 PM

It is good to see you with a kitten in your lap again!

Thank you Becky. It's wonderful to have a kitten in my lap again!

I've added the official portrait to the blog entry. Burgundy is a good color for him!

He is adorable! Congratulations.

Fan of your blog.

On the other hand, he slept peacefully all night long, loves lying in my lap, is a superb purrer, and with a fair amount of effort can climb onto my bed. So I'm hoping the crying and the lack of food/litter is still nervous adjustment on his part.

Right now he's climbing all over me and purring, very endearing kitten things to do!

He is so cute. Congrats on the new kitten!