The Word For The Day Is "Fatuous" 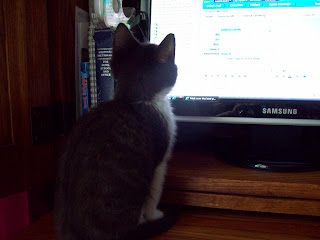 Today is the two week anniversary of my adoption of Scooter (and his of me). Since he was eight weeks old then, he must be ten weeks old now. I counted back, and that lands his birthday mid-February, which, oddly enough, is where my birthday lands as well. So I decided he and I share a birthday.

Because tomorrow I'm taking my mother to Dr. Eye Doctor, and then in the evening, participating in an online discussion of Life As We Knew It, and on Tuesday going to New Hampshire, I'm posting tonight. Only because I have nothing in particular to say, I'm putting on a new Scooter video. It's kind of career based, since Scooter is somewhat obsessed with the LAWKI mini-poster I keep on the floor of the den. He sees his reflection in it, and keeps trying to locate the kitten.

Stop snickering. This is considerably brighter than I was at ten weeks!

Hi Susan! Thanks for participating in that online book discussion. (It was a bit hectic compared to the others I've attended, but you did an admirable job!) I know the OBNJ committee appreciates your participation as well.

It was an interesting discussion and I enjoyed the tidbits of info from you.

I am exhausted! The online book discussion was so much fun.

I only wish I could have answered all the questions.

Dear Susan,
I've just discovered your blog! I'm a big fan of your book Life As We Knew It, and the sequel. I didn't know that you were working on a third one. From your synopsis, it sounds like parts of it are going to be heartbreaking. Life' was so brilliant and had a great deal of hope at the end. I carried my copy around all summer long. I ended up reading it again in mid December and couldn't figure out why I was so restless. I read the chapters about Mrs Nesbitt's death and the claiming of her goods the night before my mother in law died this January and the whole thing fell into place.

Anyway, I just wanted to touch base and let you know that I recommend your books to everyone. :-D
Bests,
Marianne

Thank you so much for your comment. I apologize for taking so long to respond, but I've been in New Hampshire, and while I had my little pink computer with me, I was too exhausted at the end of each day to do much with it!

I loved writing all three books, but my involvement with LAWKI was so intense. I felt if I cared so deeply about it, other people might also.

But everytime I hear from soneone like you, I simply marvel. It's so gratifying to know that there are people who love LAWKI like I did (and still do!).

Thank you for taking the time to post your comment. Next time, I promise I'll respond more quickly.