I Know I Should Be Working On My Rewrites

But they just announced that the 2014 US National Figure Skating Championships will be held in Boston! 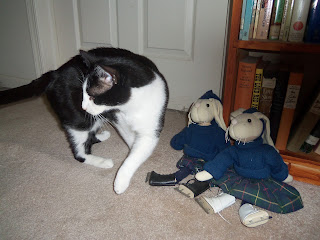 In honor of the announcement, I tried very hard to get Scooter to pose with the figure skating bunny rabbits, but as you can see, he wasn't interested. Actually, he was kind of annoyed because I closed the closet door, which he was considerably more interested in than triple lutzes and the suchlike.

Spellcheck, by the way, doesn't approve of lutzes or toeloops, or axels. Guess what. It doesn't like salchows either.

Flip, flip, flip. Finally, a jump it accepts without question.

The last US Nationals held in Boston was the best Nationals of all, ever, without question (okay, you can question) because the skaters and coaches and us folk rode on the same buses together, and to make sure the skaters and coaches got to competitions on time, we had actual police escorts. I know this won't happen again, because they no longer allow the fans to ride on the competitors' buses, but it's one of those memories you cherish forever. As opposed to the memory of rewrites, which I will never ever cherish ever.

When I finished work on Sunday, I used my handy dandy calculator to determine that I was 44% finished. Sadly, I am still 44% finished, or maybe even less, because I decided I needed to add another tiny scene, which somehow I didn't get around to writing yesterday or today.

I didn't write yesterday, because I spoke to the librarians of Orange, Ulster and Sullivan counties, and had a fine time doing so. Remember how I was going to make them work on a new book idea I came up with last week? Well, I didn't, not out of the goodness of my heart, but because I worked the whole thing out myself. It cost me a night's sleep, but I did it. I actually think I'll write the book later this summer (assuming I ever get  56% more rewrites done). It should be short and I know the beginning and the ending and a sufficient amount of the middle. Basically, it's 3 novellas that take place on the same day, which will be a great relief after all these moon books that take place over months and months and I have to remember the dates and add endless tiny scenes in between the dates I've already written scenes on.

Tomorrow is the 19th anniversary of my father's death (Spellcheck doesn't like 19th either, which is really kind of ridiculous). My brother is coming up, and we're taking our mother to the cemetery and then out to lunch. So I don't see that as a big work day, or even a little work day.

I guess I'll get back to serious work on Thursday and plow my way through until the middle of next week, when I'd better have all 100% done. Of course, there's the French Open to watch. I do want to root Rafael Nadal onto victory. Spellcheck doesn't like Nadal either. Hmm. How will it feel about Federer? Okay, I'll try Murray. Murray it likes, but I'm rooting for Rafa (it hates Rafa) anyway.

You should see this thing. It's red line after red line.

All right. I'm going to celebrate some more, and then come up with another excuse not to work. I'll let you know when the rewrites are finished and I've mastered that quad loop triple loop combination!
Posted by Susan Beth Pfeffer at 4:10 PM