Two Four Six Eight! All We Do Is Wait Wait Wait!

You think I'm just waiting to hear from my editor about The Shade Of The Moon The Absolutely Final Attempt?

Sadly, that's one of at least three things I'm waiting for or about or something. Four things if you include waiting for thunderstorms to break this late June heat wave. Five, if you add waiting for Scooter to stop thinking of me as a cat toy.

Professionally, I'm waiting for confirmation for a library event next fall. I was invited months ago, and haven't heard a thing since. It's on my calendar, but I'm not sure I'm on theirs.

I'm also waiting for my German royalty check, which is two months overdue. I'm relieved to report I don't need the money, since I bought a great deal of cat food when it was on sale, which is the only thing Scooter cares about at least. But I'd really like to know how much the check will be for, should I ever get it.

I even had a dream about it last night, only the check was less than I've been hoping for. It would clearly do my subconscious a world of good to have that check already.

Non-professionally, I'm waiting for the Yankees to break their two game losing streak, which Todd Strasser and I are completely responsible for. We had tickets for Wednesday's game (we go once a year; it's a tradition), and the Yankees had a 10 game winning streak going into Tuesday's game, so we both decided it would be better if the Yankees lost on Tuesday, because you can't really count on a 12 game winning streak and we wanted to see them win.

So the Yankees lost on Tuesday but then they lost on Wednesday, even though we were there cheering them on. And now they're going to play the Mets, and it's always so embarrassing when they lose to the Mets (although Todd and I are now both R.A.Dickey fans, so we won't mind so much if the Yankees lose to him).

In addition to Todd being totally responsible for the Yankees' 2 game losing streak (I've decided I'm blameless after all), he also failed in his manly responsibility of noticing I've lost weight. I even gave him some help, by pointing out to him that I had, and he still didn't notice.

Here are two portraits I posed for, just so you can see the difference. Notice how much shorter I'm wearing my skirts these days, now that I have such svelte gams. 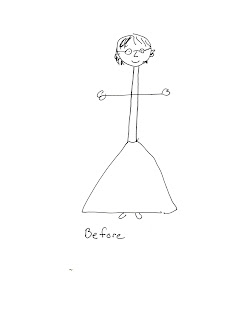 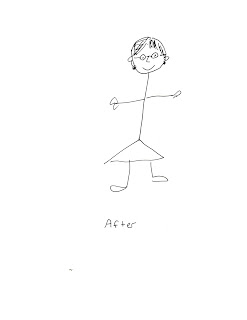 I also got a haircut.

Oh well. If I ever hear anything about anything, I'll certainly let you know.

In the meantime, you'll find me on my scale, waiting for the weight to fly away!

Been doing a lot of waiting myself lately. But I try not to think about it.

I find the waiting goes much faster if one obsessively plays FreeCell!

Have you read any of Todd Strasser's books?

I have a lifelong rule of not reading books written by people I know, but I've broken that rule a few times for Todd's books!