Like all self-employed people, writers don't know on Jan.1 how much money they'll have earned by Dec. 31. There are reasons to be self-employed, but financial security isn't among them.

Unlike many other self-employed people, writers (at least book writers) earn money from work they did long before. Twice a year, we get royalties, money based on continuing sales of our titles. The more successful the book, the more royalties you're likely to earn.

Royalty checks come twice a year. The way they work for me (and for most other writers, probably) is the publishing house sends a check to my agent, where 15% of it vanishes, and then 85% makes its merry way to me. Royalty season is the same for every publisher, approximately April and October.

Approximately is the key word here, since some publishers are prompt in their payments, and others (like the publisher of my moon books) are a tad slow. Okay, more than a tad. And it's a good faith system, since writers have no real way of knowing how many books have been sold.

What's also peculiar about this system is writers generally don't know how big the check is going to be until the envelope shows up in the mail. My experience is no one wants to tell you either.

Personally, I hate surprises, and I used to try to weasel the information out of my publisher or my agent. If you need the money to pay for rent and food, it's really helpful to know how much will be coming in.

Two excellent things happened to me in recent years. The moon books have sold lots of copies, so I've made a healthy amount of money from them. And I moved into an apartment. It used to be when I earned healthy amounts of money, I'd build a new room or remodel the kitchen. You can't do that with an apartment rental,which has forced me to put money in the bank and keep it there. The lack of temptation can be a good thing.

This year in particular, it's a very good thing. Last year my October royalty check came on Nov. 17. And last year, my publishing house and my agency were open during royalty season.

This year, both of them were closed for last week, since there was no electricity below 34th St. So I can only imagine how long it's going to take for the check to be sent out.

I'm fine. But with Chanukah coming very early this year...hold on, I think Scooter just broke a bowl. 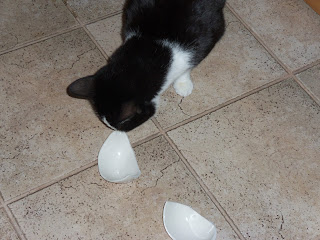 Forget Chanukah. That royalty check, whenever it arrives, is going to be needed for bowl replacement!

Are the foreign book sales lumped in with the domestic, or do those royalties come separately? the whole thing sounds stressful - at least to me! I much prefer a steady paycheck, even if it's not much money!

Foreign sales come separately. The German (and I guess the French) royalties come once a year, which would really have driven me crazy if I depended on their money to pay the rent, etc.

Whenever the royalty check arrives, I'll be glad. I guess the annoying part is not knowing when (or how much for that matter)!