See You In September

Unless something really extraordinary happens between now and then.

I'm about to have an onslaught of (beloved) house guests. The next couple of weeks are going to be (by my standards at least) quite the social whirl.

Sadly, when I'm not whirling with my friends, I'll be cleaning the apartment in preparation. Which is what I must do now.

So don't think of this as a dust off, but I'm off to dust!

Posted by Susan Beth Pfeffer at 8:24 AM 4 comments:

Another Way To Read My Books In Europe

Over a year ago, I got an email from a woman who lived in an Eastern European country. She had seen a recommendation of Life As We Knew It and was interested in reading it. But living where she was, it would have cost a lot of money to have a copy shipped to her. And the book wasn't available for her Kindle, at least not in English.

At that point, I didn't know a lot about Amazon/Kindle, so I contacted my agent to ask why that was. It seems that when we sold the UK rights to the moon books, we hadn't included the ebook rights in the contracts.

We asked the UK publisher if they would like the ebook rights, and they hemmed and hawed and ultimately decided they didn't. Don't ask me why not, because it doesn't make a lot of sense to me, but a no is a no.

So my agent contacted Houghton Mifflin Harcourt and asked them if they would like the ebook English language rights, and they said sure, why not. So we signed contracts. They didn't have to pay me a penny more, but I get a nice royalty rate, which works fine for me.

Now if you're in a country which has Amazon/Kindle available, you can now buy a number of my books in English (the German versions have been available on Kindle from the beginning). All three moon books are  there, as well as my older titles that I put up as ebooks (see the right side of the blog for information about them). In addition, Blood Wounds can be bought on Kindle outside of the United States and Canada. Since Blood Wounds hasn't been published outside of the United States/Canada, this is pretty much the only way of reading it without having to pay for shipping.

Here's the Amazon/Kindle listing from Amazon UK.com and Amazon Germany. com  and Amazon France. com (notice that the French versions of my books aren't available on Kindle, for reasons I don't understand). Those are the only countries I have listings for. Amazon isn't available every country, and when you google in something like Amazon Brazil, you get a lot of listings for some river or another.

But if you're in a country where you can use a Kindle, and you're interested in reading one or more of my books, you now can, thanks in part to a woman in an Eastern European country who took the time to email me to ask why she couldn't!

I'll Write A Sensible Informative Post Next Week I Promise

I actually have two in mind.

But this week has been crazy, partly because of the Olympics, which I love on TV and online (do you know, well of course you don't but you will momentarily, that I even watched the Men's Triple Jump online  because the competitor from Haiti is actually from about 20 miles from here).

But in the midst of all this chaos, I made a magnificent change to the right side of the blog. See? I added a slideshow of Scooter at his most intellectual. It took me a long long time to figure out how to do it, and I'll never do it again, since I have no idea how I actually got it up there. But it was definitely my accomplishment of the week, and it merited a line in my Friday gratitude diary.

All right. I still have dozens of plastic bags to put away and my mother's laundry (done yesterday) to take out of the drier, before watching track and field online.

Next week had better be calmer! 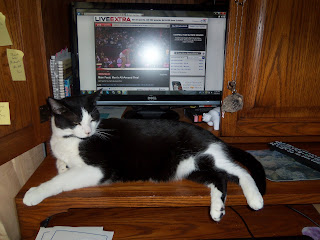 Yes, you guessed it. I am very excited to announce we've sold the Indonesian rights to Life As We Knew It, The Dead And The Gone, and This World We Live In.

I must now go and cheer the Indonesian Olympic team to victory (and no badminton jokes please!).
Posted by Susan Beth Pfeffer at 8:03 PM No comments: