It's Back To Redecorating 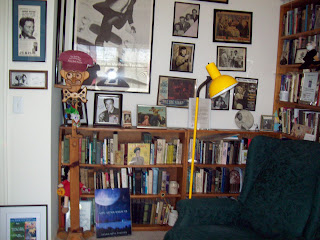 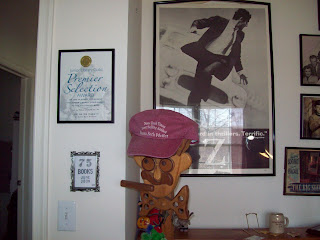 I'm home.
It was a wonderful vacation. I won't describe the drive home from the airport except to say if you ever have a choice between driving through a hailstorm or not driving through a hailstorm, I strongly recommend the not option.
Now that I'm home and can't adopt a kitten (I called both local humane societies approximately the minute I got home and neither have any kittens right now), I've returned to redecorating the den. What I should be doing is spring cleaning and putting all the books in some kind of order, but since both of those things could be called work, I've been focusing on the redecorating instead.
Only I can't really do the redecorating (which will consist of putting stuff up on a couple of walls) because I'm waiting for the New Jersey award for Life As We Knew It, and won't put stuff up until I get it. So this is kind of pre-redecorating, which I call work, but only because I call everything work that doesn't involve American Idol this time of year.
Here's the pre-redecorating dilemma. I'm moving all the movie stuff into the spare bathroom (aka the cat's room, only since I don't have a cat, it's the spare bathroom), which will make it a very well decorated spare bathroom and I hope when I get a cat, it appreciates it (I'd hate to get a cat that doesn't like old movies). Where the movie stuff is, I plan to put career stuff, including the New Jersey award. Only I think I have more movie stuff than career stuff, which could be a problem, since without the movie stuff I have movie stuff nail holes, which I need to fill with nails holding the career stuff, of which there may not be enough, unless the New Jersey award is the size of the Z movie poster, which I doubt it will be since people in New Jersey have a lot of taste, which I know from watching The Sopranos.
I put the career stuff on the floor, so you can see how beautiful, tasteful, and 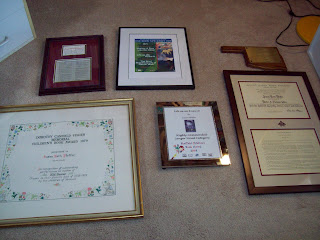 sparse it is. There are also before and after pictures of the space to the left of the wall in question, to demonstrate how clever I am at hiding movie stuff nail holes.
That thing in the top left corner of my career stuff on the floor is the New York Times best seller list, which I got framed and picked up today. The little card is the congratulations card that came with the flowers Harcourt sent. And while it's true, I have two South Carolina Young Adult Book Awards (for About David and The Year Without Michael, since you asked), they're both gold medallions and not wallable. Le decorating sigh. And actually, I'd prefer to hang the long thin thing (my honorary college degree) on the little side wall to the left of the Groucho wearing the New York Times Best Selling Author cap, but if I do, I have even less stuff for all those movie stuff nail holes. Le double decorating sigh.
I'm reasonably sure I have other career stuff, but my concern is that it's all in the outside storage closet somewhere, so I included pictures of the outside storage closet to give you an idea of the nightmare that will be trying to find career stuff in the outside storage closet (by the way, that closet within the closet is where I keep all the extra copies of my books, and we won't discuss what the inside of that closet within the closet looks like, because driving through a hailstorm was nightmare enough). 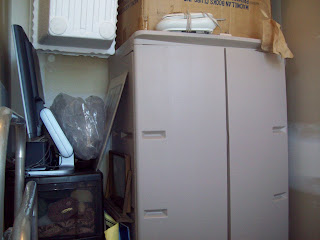 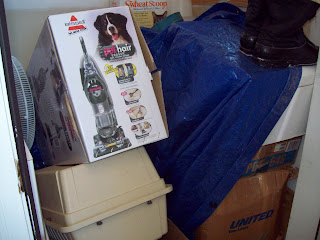 Oh well. Going through everything in the outside storage closet can't be much more dangerous than driving through a hailstorm. Or at least I hope not!
Posted by Susan Beth Pfeffer at 4:40 PM

It certainly sounds and looks like you have your work cut out for you. Good luck.

Now that the Moon series is finished (so you say), are you thinking of writing anything else?

What are you reading now?

The Moon series is definitely finished (I think trilogy is so much classier than series), but I'll have rewrites and copy editing and lots of other work to do before it's officially finished for me. And while I can't really say my brain cells are dead, they certainly would like a nice long rest. So mostly what I'm thinking of is organizing the books (a job I intend to at least start in a few minutes) and talking at various schools, libraries, and conferences (I have a bunch of those things over the next couple of months).

I'm still not reading as much as I should, but the book I'm currently slogging my way through is The Great Crown Jewels Robbery Of 1303 by Paul Doherty. After I finish that, I'll see what I can find on my well organized shelves.

I have the same pet hair vac and love it!

Well, now what I need is the pet (this is definitely not kitten season).

I spent the afternoon organizing the books (I spent yesterday afternoon talking to my friend Christy instead). Or at least mostly organizing them (the movie/tv section still needs to be put together properly).