I'm off tomorrow morning to the Florida Association For Media in Education (FAME) Conference, so before I go, I figured I'd bring you up to date on things.

I'll start with the personal stuff. My mother and I went to the Orange County Arboretum this afternoon. Two months ago, she fell in a parking lot pothole and suffered a rib fracture. She is now back to her 97 year old health and happiness. Here, in lieu of a thousand words, is a picture.
She isn't riding a motorcycle-that's her walker.
Before we went to the Arboretum, we had lunch at her assisted living dining room. On the menu was Sole Francoise. Since my mother keeps kosher, I figured I'd better make sure there was no shellfish in the stuffing, so I asked the very young waitperson what the Sole Francoise was.
"Sole is a fish," the very young waitperson replied. 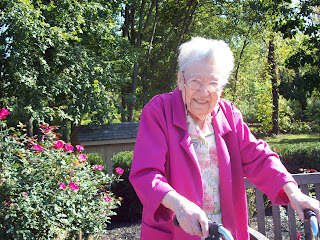 It turned out to be shellfish free and very tasty.
Those of you who look at the list of where Life As We Knew It is nominated for young readers awards will have noticed that Australia is no longer on the list. It was long listed for the Inky Award, but didn't make the next cut. So I wiped the entire continent off the list. I may have wiped the entire continent (or at least its most populous cities) off the map in LAWKI; I really don't remember. I'm sorry to see it go from the list though. It made LAWKI seem so international. 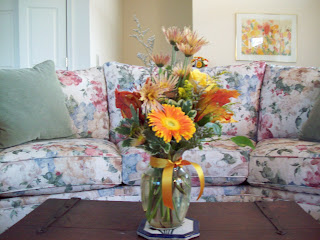 Speaking of LAWKI, Harcourt sent me congratulatory flowers on Friday. I took two pictures of them. One picture is clearly superior to the other, but the less great picture has the Congratulations card in it, so I'll include both. Think of it as two thousand words.
The sofa, by the way, is curved. I bought it when I moved into the apartment. My late cat Alexander used it as his own personal scratching post. 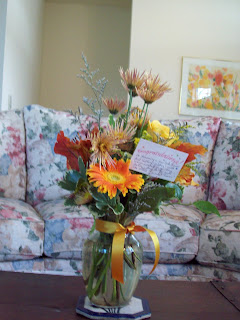 My guess is while I'm at the FAME conference, someone is going to ask me if there's going to be a third book. Until about an hour ago, the answer I intended to give was, "Beats me." But my editor called me this evening and said that Harcourt really truly does want a third book. That may be a paraphrase, but there was a lot of sincerity in her voice.
What's the third book going to be about? Well, you don't expect me to know everything. The plan is for my editor to call me Monday afternoon and we'll discuss third book possibilities then.
If my editor asks, I'll even tell her what sole is!
Posted by Susan Beth Pfeffer at 6:35 PM

Your mom is amazing and beautiful!

Have fun in Florida!

Your mother looks awesome for 97!

And horray for a third book! :D I can't wait! Have fun at FAME!

Oh, I am sooooo happy to hear that there will be a 3rd book!

Congratulations on the NYT! I would have more respect for Harcourt if they had been as supportive of book 3 prior to that news but better late than never.

Whoo Hoo! to CLA, too. Ann Marie gave us the good news about that last week, but I haven't had the chance to stop by and tell you how happy it made me to hear it.

FAME? I used to think of David Bowie or Irene Caras; now I will think of LAWKI or Pfeffer!

Your Mom looks great, and I wish her continued good health.

Amazing how ignorant some people are. I went to a curriculum conference last night for my sixth grade daughter and the English teacher absolutely ranted on how atrocious children's spelling is in the computer era. She also was quite upset over handwriting which, for the most part, she said was practically illegible. Luckily, my daughter didn't fall into those categories, but it does give one pause for thought.

Glen - who wishes you wouldn't call him anonymous, but frankly can't do a thing about it.

Thank you for all your good wishes, etc. I didn't have internet access while I was in Florida, but my friend Christy read me your comments, and I loved hearing them.

I'm off to take one long complicated week and crush it into a brief coherent blog entry.