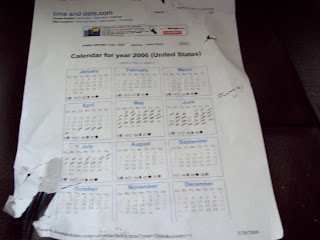 I thought it would be a good idea before beginning the revisions on This World We Live In to print a calendar and cross off the dates that I use in the book. The editor wants me to add some stuff, so by finding which dates were available, I could squeeze the new entries there.

Printing the calendar reminded me that June 1 (aka today) is the first anniversary of the official publication date for the dead and the gone. It's also the anniversary of my party in celebration of 75 books published. And because I was in a bad mood over the rent increase in the lease, it brought back a memory of my feeling last summer that after three years of non-stop good news, things were going to level out, and I was in for some bad times.

I did have bad times during the past year. My cat Alexander died, and then my other cat Emily pined away and died. In the late fall, I adopted Charlotte the kitten, only to have her die ten days later. I still feel all three of those losses very deeply, although it certainly does help to have Scooter playing at the keyboard even as I type this.

In addition, my mother fell twice and cracked a rib. There was a separate health worry about her. An uncle I loved dearly died. And two people I'm close to are angry at me (in both cases, they're right to be).

Professionally, there were problems as well. It was very upsetting when my editor left Harcourt, and it hasn't been the smoothest sailing since then.

But the great thing was when I remembered my conviction that this would be a bad year, I also remembered that I'd forgotten that conviction. It completely slipped my mind that I was due for bad times and should anticipate a whole slew of them. Most likely I forgot because I was so busy having a good time. I traveled all over the United States for business and pleasure, and met wonderful people wherever I went. I sold and wrote This World We Live In, and take enormous pride in it. I sold the audio rights to it before I wrote a single word, and have also sold German rights to the first two books and French rights to all three. Life As We Knew It won four awards as well as being the One Book New Jersey 2009 teen selection, and was on a New York Times best seller list three different weeks. All across America, schools are using one or another of the books for classwide, even schoolwide, reads. I've heard from extraordinary teachers and librarians, as well as from readers throughout the world. My health is great, my mother's health is great, and this particular June 1 is bright and shining and full of promise.

Oh, and it turns out I misread the lease, and my rent isn't going up after all. My mother says I can buy myself another diamond bracelet.

In celebration of all this good news, and in honor of the six week anniversary of Scooter's entering my life, I got him a remarkably obnoxious cat toy. Thank goodness he's lost it already. But here he is, in all his 3 and 1/2 month old glory. Note, if you will, the little piece of pink yarn on the floor. It turns out the reason I can never find my place in Mistress of the Monarchy is because Scooter keeps pulling the bookmark out, so he can bite off its tassel.

It's a good life for kittens and their feeders!

Susan, I need to print out this entry for when things aren't going just the way I want them to. You have a wonderful outlook on life. I'm so glad that Scooter has joined you -- I love reading about his exploits.

Hi Paige Y (that rhymes, demonstrating yet another of my extraordinary writing skills)-

I had a friend in high school who believed that life consisted of peaks and valleys and that for every up there is an equal and opposite down.

I didn't agree, but clearly her theory made a big impression on me.

Scooter's been playing all evening. My floor is littered with his toys, but I figure as long as I keep the manuscript hidden from him, everything should be just fine!

Life for me isn't going very well eather, but it could be worse. My mom has heart desice( sorry about the spelling) but at least she's alive. And my parents have paid of the house.

It sounds like you have had a rough year yourself. Just be glad
2nd place winners on AI usually get record deals. Just look at David A.
Best of wishes,
Jill

A long time ago, I bought a sampler that says As Thy Day, So Shall Thy Strength Be. I keep it in my bedroom, so I can see it first thing in the morning.

Right now, my worst problem is Scooter waking me up at 5 AM, but there have been days when the message on that sampler was what kept me going.

I try to live by the motto, 'be thankful for what you have' and I try to teach that to my kids.

Sometimes things can be bad.

But they could also be a lot worse.

It's tricky to remember to be thankful for what we have. Americans are raised to want more. I don't know if that's good or bad, but it's the norm in our culture.

These days the more I want most is more sleep. I hope Scooter outgrows his 5 AM bursts of enthusiasm soon!

I saw this LAWKI mention on another blog, http://blbooks.blogspot.com/2009/06/btt-15-in-15.html and thought you'd like to see it - not as great as seeing Scooter play, but I thought it might add a smile on top of the good news about your rent not going up, to offset all the other trials and tribulations. Life has been hectic and stressful here too - I'll write more shortly,
Elaine

Becky is so wonderful, such a supporter of reading in general and my books in particular. I live in a constant state of gratitude to her.

It was fun to see she had Good Morning Miss Dove on her list. That was one of the first "grownup" books I ever read, and I loved it and reread it several times. I own a copy, and maybe if I ever finish Mistress of the Monarchy, I'll reread it.

I hope your stress level decreases. I have a couple of friends in very high stress situations right now, and it's not fun.

What POSSIBLE reason could, not one, but two of your close friends have for being angry with YOU? I can't believe it.

I'm very fortunate to have a lot of friends, but in both cases, I failed to live up to my end of the emotional bargain. They're right to be angry.

I'm cautiously optimistic that one of them is in process of forgiving me. Maybe someday they both will.