I Bet In Oklahoma They'd Spell It Sondra 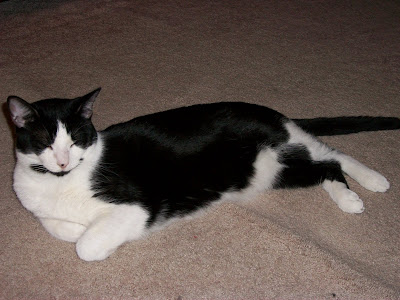 Yesterday, inspired by Scooter's example, I did absolutely nothing.

It turned out I really needed a day like that. Having my mother in the nursing center, where she gets 24 hour a day care, is considerably more time consuming and exhausting than having her in her apartment with zero hours a day care. And I was in New Jersey for a few days, doing school visits, that were a lot of fun but took a lot of time. So I was due for a do nothing day, and I made the most of it.

Well, I can't really say I did nothing. I counted the buds on my Christmas cactus. There are six of them, tiny little things, but harbingers the season, which for my Christmas cactus runs from Halloween to Passover (thank goodness the radio stations don't play Christmas carols that long).

I also read the most recent issue of Films Of The Golden Age, one of the few magazines I subscribe to. 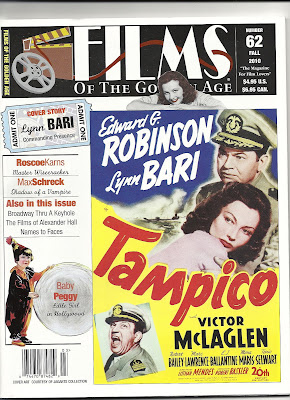 Entertaining though this issue was (and I particularly liked the article about Roscoe Karns), what made my heart explode with joy was an ad from VCI Entertainment, which based on the fact that unless you live in Oklahoma, you don't have to pay sales tax, makes me think they're located in Oklahoma, announcing that coming soon they're going to have an extraordinary double feature available on DVD.

Not taking any chances, they're calling the DVD: Positively No Refunds Vol. 2, but they don't have to worry that I'll be asking for a refund. I can't remember the last time I was so giddy about a DVD release.

The first of the movies is Cuban Rebel Girls. I can't say I've always wanted to see Cuban Rebel Girls, but I can say I've wanted to see it since 1986, which is a pretty long time at this point. Cuban Rebel Girls stars Errol Flynn and Beverly Aadland, his then teenage girlfriend. But more to the point, Beverly Aadland is the daughter of Mrs. Florence Aadland, who with the assistance of Tedd Thomey, wrote The Big Love, which, if not the greatest book ever written, is easily the second greatest book ever written, thus making it greater even than 75 of my 76 published books.

The Big Love is the true and tragic story of Errol Flynn and Beverly Aadland's big love. You can open it up at any old spot and be transfixed. I particularly recommend pages 88-89 where Beverly Aadland tries to convince Errol Flynn that he should use a deodorant (and thanks to his big love for her, he does).

Leonard Maltin gives Cuban Rebel Girls a BOMB rating, which probably means he doesn't think it's very good. But the second film on the DVD is so, for lack of a better word, superduperfantabulous, that Leonard Maltin doesn't rate it at all, probably because there'd be no space for all the stars he'd have to give it if he did. Yes, the second feature is my all time favorite movie of all time, Untamed Women! (! mine, although it's an oversight on the part of the producer that the movie title itself doesn't include one).

It has to have been at least thirty years since I last saw Untamed Women, because I got a VCR in 1980 and I most certainly would have taped it had I had the chance. But who can forget such a masterwork. Without giving away too much of the plot (and it has a lot of plot), it's about these WW2 pilots adrift in the Pacific who end up on a deserted island occupied by untamed women. Untamed men too, but I admit I had forgotten about them. Only I didn't forget the dinosaurs or the volcano, or the leader of the untamed women, The High Priestess Sandra (pronounced Sondra, because these are very classy untamed women). Or the extraordinary plot twist of having the whole story be told as a flashback under the influence of sodium pentothal, and then having proof of the story be revealed by the psychiatrist finding a dinosaur skin in the hero's pocket. Okay, I don't remember exactly what the proof was, but I do remember, and can still recreate, the dance that the High Priestess Sandra and all the Low Priestesses dance to. Not to mention the soldier from Brooklyn. And the dinosaurs. And the volcano.

And because I am one of the truly fortunate people, coming soon is tomorrow! In less than 24 hours, I can tell these strangers in Oklahoma all about my charge card number and expiration date, and then they'll send me this extraordinary double feature.

I'm even thinking about having an Untamed Women party. Then all my friends and I can dance like the High Priestess Sandra in front of an adoring audience. 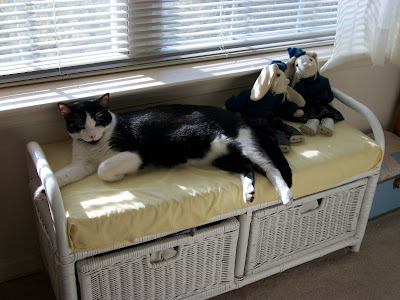 Later, if we have nothing better to do, we can count Christmas cactus buds and run off to Cuba to become rebel girls.

Life, truly, is full of promise!
Posted by Susan Beth Pfeffer at 1:56 PM

Your writing totally cracks me up. I'm sitting here in the last five minutes of my tenth grade class trying not to guffaw! They already think I'm pretty crazy.

Hi to Linda Jacobs and Leslie-

Ooh, I just remembered I haven't actually put in my order yet. I went there on Tuesday, but they hadn't offially gotten the DVD and they didn't accept pre-orders. And somehow I got too busy on Wednesday and Thursday to return there.

I will now order the DVD. I can't have an Untamed Women evening without Untamed Women (even if I can do the High Priestess Sandra dance from memory!).