"We Shall Live On And See"

Isn't that poetic? My mother said it to me, and since I've been looking for a title for this blog entry, I decided to go with that.

When my mother got her teeth cleaned a couple of weeks ago, I scheduled her next appointment for October, and realized by then she'll be 100 years old. With no cavities, I hope.

Those nice people at UPS delivered the Houghton Mifflin Harcourt Fall 2011 catalog (the one for books that come out after my mother turns 100)with its impressive page for Blood Wounds. 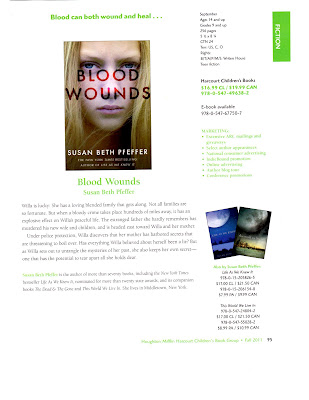 I really like the "Blood can both wound and heal..." heading, since it's genuinely reflective of the themes of the book. And I always like seeing the Marketing plan, especially, as in this case, where there is one.

By now I should have finished the revisions of The Offering, but I still have about 40 pages to go. I'll do them today if I can resist the siren call of a three hour nap. What's kept me from The Offering (other than good old fashioned laziness, the appeal of which should never be underestimated), is The Shade Of The Moon and the plotting thereof. It's been entirely too much fun coming up with plot and characters. So much too much fun that I wrote a 12 page synopsis which I sent to my editor yesterday. I think she found it a bit overwhelming. In fact, if I read between the lines correctly, she has entered the Editor Protection Program and will remain in hiding until convinced I truly am retired.

Relax.I'm not going to ram the 12 pages of plotting brilliance into this blog post. I will tell you that as of this moment (and keep in mind my publisher has not said they want any kind of fourth moon book) all the characters who set off at the end of This World We Live In are featured in The Shade Of The Moon, except for Dad, who I fairly arbitrarily decided has died. But the focus of The Shade is on four teenagers (close your eyes if you don't want to know): Gabe (aka Gabriel, originally thought of as Baby Rachel, son of Dad and Lisa), Connor, Gabe's best friend, Juliet, daughter of Mom and the late lamented Charlie (I bet you didn't see that one coming) and Meggie, daughter of Miranda and Richard (you didn't think Miranda's been celibate all these years, did you?). Meggie's full name is Megan Rebecca, for Miranda's friends Megan and Becky, but Beggan didn't work as a nickname. Gabe and Connor are 17, Juliet is 16 and Meggie is 13. So Matt, Miranda and Jon are Juliet's half-siblings on Mom's side, Gabe is her half-brother on Dad's side, and Meggie is her half-niece if such a term exists.

Hmm... Just writing all that down makes me drowsy. Maybe I should take my three hour nap before tackling those final 40 pages.

Wake me up if the world comes to an end!
Posted by Susan Beth Pfeffer at 10:08 AM

Well, Mom didn't get out much, but Charlie used to come over to discuss books.

Those book discussions can get pretty heated!

I love a good teaser!!!! Sounds great. I'll be anxiously awaiting the publication!

Woah Mom and Charlie. That is... surprising. I am excited to see the group once again, should the publisher take the right choice and choose to go forth on fourth (I feel witty when I say that.)
Jon

Thank you for keeping us informed on the progress, dear author.

Hurray for 3 hour naps! If I don't get to bed soon (it's after 11 pm as I type) than Iwill need one tomorrow!


word verification: prutat
is this some strange form of "prudent"? As in, it would be prutat to go to bed now.

I hope not -- I think the title of your latest post should be the title of Book 5 (if there IS going to be a Book 5, that is).

I was wondering if Miranda might name a child after Megan -- Megan's death seemed to affect her the most.

I know Hal's dead by now, but wouldn't it be ironic if it was his profession that got the remaining group into the "safe town" that might not be so safe?

I'm kind of glad you clarified who Juliet was -- and that in that sense Charlie didn't die in vain.

Once again, I won't overburden you. But do consider using that blog title if you can, even if there won't be a Book 5 -- it's too good to waste!

My mother's lovely poetic title came in a discussion of a local strip mall, whose parking lot is in dire need of repaving. It's a whole big local business scandal kind of story, but since we use that mall, and my mother fell in one of the potholes there a couple of years ago, it's one of particular interest to us. And I guess it brings out the poetic in my mother.

And while I continue to await word on possible book four, let me say I'm hoping the ending will offer sufficient closure that there won't be a book five. Although right now, I'm more focused on the possiblilty of closure for the parking lot potholes!

WHAT HAPPENED TO ALEX?

Yes, where's Alex? And who is Richard? Did I forget him from one of the books?

Richard would be a brand new character. A few of them will slip in!

And my word verification couldn't be more perfect- decalmer. It's not a real word, but de calmer de better as far as I'm concerned!