Scooter, Guardian Of The Spoilers

I tidied up my Alex story and wrote a one page summary of what I intend The Shade Of The Moon Short Story Version to be, and zipped them off to my editor and agent.

Now it's up to my publisher to decide, and given that this is December, a month where no decisions are made, I doubt I'll hear anything definitive in 2011.

But I've done my part, and can resume obsessive playing of Freecell (my winning streak at a tidy 606) with a clear conscience.

For those of you who are curious, I'm going to put the one page summary here. For those of you who might regard the one page summary as a spoiler (although how it can be a spoiler when there's no guarantee the publisher is going to say yes, and even if the publisher says yes, who knows what changes might be made between now and when I write the book, and then it'll take at least a year before the book is published, by which time you will have surely forgotten every single word of the summary except my name, which I trust even a year from whenever you'll remember and know how to pronounce, like Pepper only with "F"s, I don't know).

But for the sensitive to spoiler ones amongst you, I'm going to put a brand new taken for just this occasion picture of Scooter. If you want to be spoiler free, or you just don't care to read anymore, then say hello to Scooter and leave my blog behind (at least until the next time I have something to blog about!). 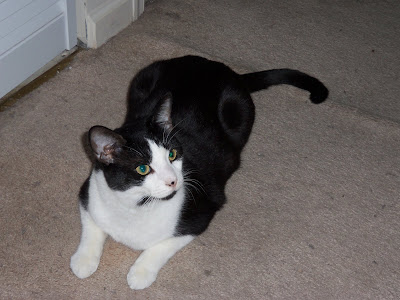 Ever since the publication of This World We Live In, I’ve received daily requests for a fourth book, one that tells what becomes of Alex and Miranda.

I want to know what becomes of them also. But it’s very important to me that any fourth “moon” book be different in structure, if not style, from the other three books.

What I’d like to write is a volume of “moon” stories, focusing on four teenagers, Miranda (from Life As We Knew It) , Alex (from The Dead And The Gone), Lark Frasier, a British girl left stranded in the United States, whose life intersects with Alex, and Shawn Delaney, a boy who has had to fight for every moment of survival, that Miranda meets through her friend Sammi.

The book would be chronological, with each story indicating who the main character is and when the action takes place. The stories will be independent of each other, but the volume will interconnect, leaving the readers with a strong sense of what the world has become, and what Miranda and Alex’s future will hold.

I really hope this gets published. I know I'd love to read it. I'm also incredibly excited that you are coming to the Provo Library next fall!

I'm really looking forward to my trip to Provo. I've never been to Utah, and I'm planning on adding a day to the trip to do a little bit of touring.

See you next fall!

Wow! This will be really interesting if it ever gets published! Thanks for sharing!

You put it perfectly. It will be really interesting if it ever gets published!

The fact that there's even a summary makes me very happy. This is far more exciting than math homework
Jon

Thank you Jon, but most anything is more exciting than math homework!

You mentioned Utah -- could Shawn Delaney be from there, perhaps one of the "lost boys" kicked out of the FLDS because he was young and competed with the degenerate old men for the girls in the sect?

Cute kitty!
That it a book I would definitely read and I hope it gets published.

Keeping my fingers crossed for you!

Hello to Anonymous Santa Fe and to Celeste-

I'm waiting to give Shawn a backstory when I find out if my publisher is actually going to want Shade Of The Moon Short Story Version. As of right now, he's pretty much just a name (and even that could change).

And yes, Celeste, Scotter is an extremely cute kitty. At least I think so!

I'm thrilled by the prospect of a continuation to Alex and Miranda and their story. I REALLY REALLY REALLY hope this idea gets picked up.

When I know something, I'll certainly let everybody know!

I already want to read it. And Scooter looks quite nice in his new picture!

I'd like to write it, so I hope it happens.

And I love the picture of Scooter, one of his best, I think!