The Ring Of Truth 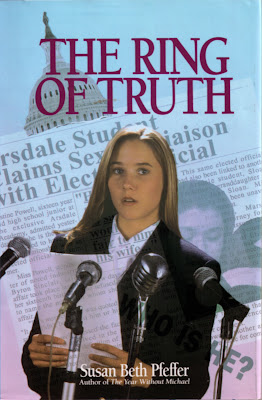 But of all the books I've written, The Ring Of Truth is the only one that started with an image. I'm not a visual person, and I'm certainly not a descriptive writer, but one day I pictured a room, and from that came the book.

At the time I wrote The Ring Of Truth, I was intrigued by the Big Lie, the kind of falsehood that starts out almost casually and takes on a life of its own. I'd been exploring various plot possibilities that hinged on a Big Lie, but for some reason or another, I couldn't make any of them work.

Now things get hazy in my mind about the origin of the book. Because for reasons I don't remember, and quite frankly can't even conceive, I decided the Big Lie in question would involve teenage girls and prominent politicians.

When I came up with The Ring Of Truth, I was doing most of my writing for one publishing house and had an extremely comfortable relationship with my editor there. I approached her with the idea for the book and she gave me the okay. In retrospect, this was as loony on her part as it was on mine. But I gleefully wrote the book and she edited it and it got published.

A couple of things happened after that. The reviews (and they included a New York Times Book Review review, so the book was taken seriously) all thought the book was about sexual harassment. I guess sexual harassment was the hot topic of the day. But for me, it was just the McGuffin, the incident on which the various Big Lies would play out.

The other thing that happened was my realizing that not only did teenage girls have no interest in state politics, they didn't even know what a lieutenant governor was, so why should they care if some character or another claimed said lieutenant governor made a pass at her?

As you may have guessed, The Ring Of Truth was not my biggest selling book.

But what I remember most vividly is the image of the room and a mirror that sometimes reflects what's in front of it and sometimes doesn't.

The Ring Of Truth is now available on Kindle and on Nook.

Read it and let me know what the plot twists are!
Posted by Susan Beth Pfeffer at 11:44 AM

I love that your old YA books are coming out on Kindle. I love reading and remembering YA books that were out in the 90s. You can't even find them at the library anymore

So many wonderful new books come out (a few even written by me) that libraries have to cull collections just to keep up with the times.

But yeah, it is fun to read what you read a while ago, and see if you still like them!

I was active in politics as a teen--was even in Teenage Republicans for six years (yes, I joined at 12--what can I say, it was AZ). Even got a scholarship from the Republican party at 18. I campaigned for a senator (who won) and a governor (who won--and was later indicted...so goes it in AZ).

Just wanted you to know teen girls (who read!) did care about politics.

Ah, but did you know who your lieutenant governor was?

Actually, I don't know who the current lieutenant governor is in New York. I can tell you the name of the governor, and the names of his father and his girlfriend and the last name of his ex-wife, but that's where my knowledge of state politics seems to end.

Which is why you are such a far superior Susan!

AZ has no lieutenant governor, or I so would've known!