Our number has increased by two. 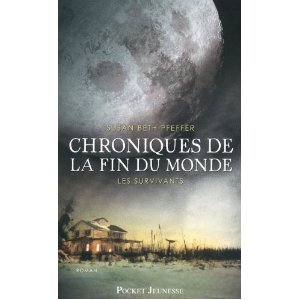 Yesterday, my mail carrier was kind enough to bring me CHRONIQUES DE lA FIN DU MONDE Les Survivants. Or as we in the United States think of it- the French version Of This World We Live In. 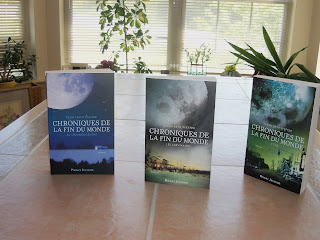 First I reunited it with its French relatives. 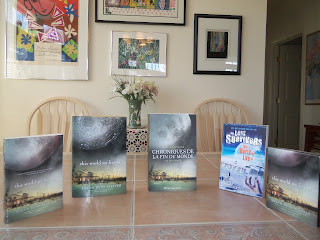 Then I introduced it to its American and British cousins.

Today 殞月之城  arrived.  That's the Chinese version of Life As We Knew It. Here's some badly translated by Google information about it (along with a nice picture of the cover).* 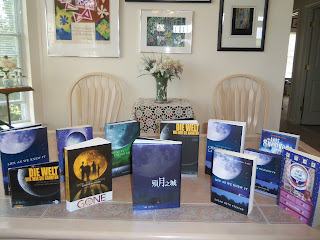 Since I just happened to have my camera out, I brought in all of 殞月之城 's first cousins, so they could get acquainted. 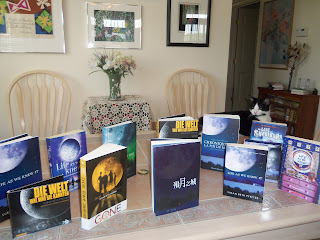 As we all well know, Scooter can't resist a party.

In case you were wondering, 殞月之城 is all in Chinese. But there are five footnotes for terms its readers might not be familiar with: West Nile, Ina Bauer, The Sound Of Music, Wishbone, and Date. To prove my incredible creativity in English, here's a sentence using all five:

After we broke the wishbone on our dinner date, Ina Bauer and I went to the West Nile Theater and saw The Sound Of Music.

*If you press the third button on the top, it takes you to their The Dead And The Gone page.
Posted by Susan Beth Pfeffer at 3:02 PM

This is actually very impressive!

The most impressive thing was getting Scooter into the picture. I kept trying and he kept refusing and then he popped up there all on his own, so I quickly took yet another picture!

Scooter doesn't charge in the book ?

Scooter is usually well behaved and cooperative when I pose him. Or at least that's what I tell myself!

cooool, and I like that "After we broke the wishbone on our dinner date, Ina Bauer and I went to the West Nile Theater and saw The Sound Of Music."

on behalf of where this book is translated, Taiwan that is, I'll translate this lovely sentence into Chinese: "在小晚餐敘上拉開許願骨後，伊納包爾和我便前往西尼羅劇院觀賞《真善美》的演出。"
although... Ina Bauer and West Nile in the book means something quite different~ :)
oh and actually there are more footnotes for Taiwanese readers... such as the Ivy League, which i thought the translator REALLY underrated our intelligence~

Hi Timo and thank you for your translations!