I could, I suppose, tell you all about the excellent time I had in San Antonio at the International Reading Association convention. I could show you pictures of the San Antonio Riverwalk, where the 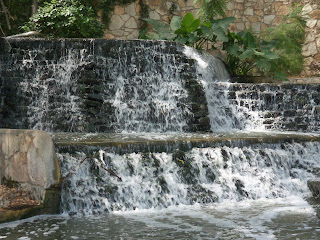 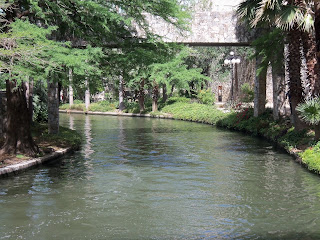 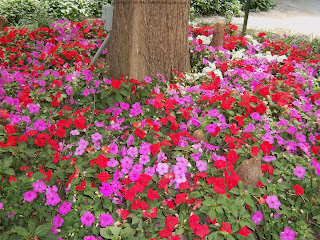 flowers are blooming and late April feels like May and not March.

Yes, I could do all that. And maybe if I had a little more energy I would.

But instead, I'll tell you that at the convention, my very nice publisher, Houghton Mifflin Harcourt (who I'll love and cherish until I really go crazy waiting for my royalty check to arrive) gave me my very own Advance Reading Copy of The Shade Of The Moon. 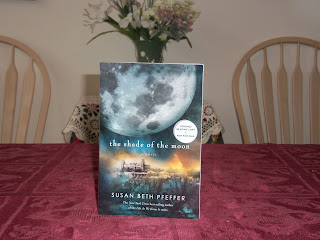 Shortly after I came home, my friend the UPS man arrived, bringing me a package containing five more ARCs. Naturally I posed them in front of the forsythia Marci was nice enough to leave for me. 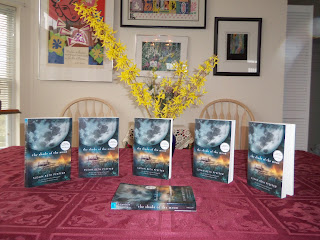 Just as naturally, Scooter came over to inspect them. 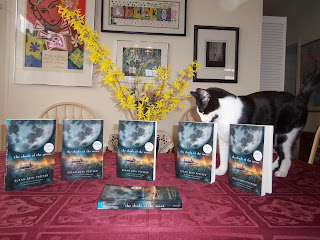 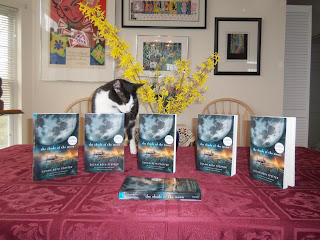 Since I already have an ARC and don't need five more, I've decided to offer them to you.

On the assumption that maybe more than five people will want one, I will choose at random five people to send them to.

Here's what you will need to do:

Email me over at susanbpfeffer@aol.com and tell me you'd like one of the ARCs. If you are under 18, get your parent's permission to email me (a total stranger), especially since if you're selected, I'll be sending the ARC to your home, and we don't want your parent to be upset or concerned when the package shows up. If you're over 18, you're on your own.

Where was I? Oh yes. You email me, and then I copy your email address on a slip of paper and I put the slip of paper into the Bolivian hat, which my friend Christy bought me during our brief but memorable stay in La Paz, Bolivia. 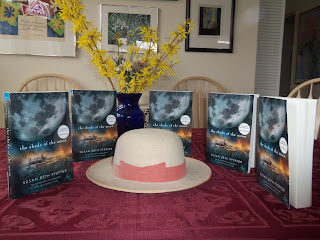 Oops. It will work better if the Bolivian Hat is upside down. 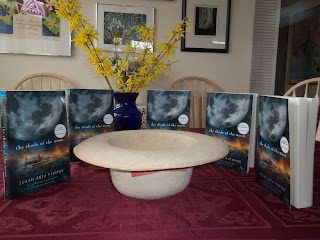 I'll select five email addresses extremely randomly (I even close my eyes while doing so), and if you're one of the five, I'll email you and ask you for your home address and who you'd like to have the ARC inscribed to (along with the "Accept the impossible" part, which works pretty well, except it takes a lot of space, so I have to remember to start it closer to the left side of the page). And then off the ARC will go.
Since not everyone who reads this blog reads it the instant it gets published. I'll do the drawing on Monday, April 29, so if your email gets to me by then, it'll be in the hat along with everyone else's. And don't worry if you're from somewhere other than the USA. This drawing is open to everyone on the Planet Earth.
I don't know if I'll be getting any more ARCs (the five that arrived yesterday were a very pleasant surprise). It could be that after the American Library Association conference in late June. I might be able to scrounge a few more, in which case, I'll do a second drawing then. But don't count on that, so if you're interested, email me before Monday.
And if you're not interested, keep it to yourself. The Bolivian hat is very sensitive!
ETA because I just realized I should ETA the following: If you get selected, there's no cost. I pay the postage. And don't expect to hear back from me unless your email is randomly selected, in which case you will hear back from me when I ask you where to send the ARC.
Posted by Susan Beth Pfeffer at 2:42 PM

I just wanted to tell you that the cover is *amazing*!!!

I agree, Cassie @ KnowsProse. I've been very fortunate with the covers for all the moon books.

Did you receive any entries yet? I tried to email you but the message bounced.

I know I typed the address correctly because it’s identical to the address I used when I won one of your audiobooks a few years ago.

So something seems to be wrong.

I've gotten 2 entries. If your email starts with a T or the first initial is H, then it went through.

If not, all I can suggest is try again.

Oh, foolish me. I did spell your email wrong on the first attempt. Then I didn‘t notice that when I compared it to past emails to you, my mistake was auto-corrected so it didn’t show! Anyway, I’m M.S. and I would be thrilled to win an ARC.

Thank you Anonymous (M.S.) for letting me know.

I just sent you an email where i also mentioned this, but I think people are getting a bounce message because they clicked your email address in the blog post, and it's mispelled. you left out an 'F' in your last name!

That was very dumb of me!

I will correct it immediately (and take an obviously much needed nap).

Bounced back on me to. Where is the link with the correct email address

Other people's emails are getting through.

Oops! Deleted my comment! So hecka excited for the chance to win! I can hardly wait for the book to come out!

I admit, I'm getting a little impatient about it also!

Fabulous news. I cannot wait to read this one. So excited!

I have entered every single one of these ARC contests and I have lost each and every time. I am not going to risk my perfect record now! Also, if I get a trade paperback it won't match the other three on the shelf, OCD as that sounds. So I hereby recuse, but with the promise that I will buy the hardback the second it drops.

Well, it's good to know The Shade Of The Moon will sell at least one hardcover.

Thank you in advance, Mr. Cavin!

Haven't been able to read the blog till today my names Kaitlyn I'm 13 and I absolutely love your books. First thing on my to do list is to enter your drawing.

Thank you both holdennj and Kaitlyn-

Both your emails were received and into the hat you'll go!

I just sent my email! Hopefully I stand a good chance!

Your email was received and your chances are as good as everyone else's!

I'm way late to catch this (bummer) but congrats to the winners!

I have every reason to believe that rumor is true.

So uncross your fingers and go get a copy!

That's great! I'm sure going to try to get a copy!!