I was very mopey this afternoon, but not for the standard reasons.

Actually, I was feeling quite happy. Mopey was more what I felt I should be feeling. In fact, I told myself if it weren't for the fact that I was feeling contented and happy, I might even be depressed.

Still, it's hard to diagnose oneself as depressed when one is feeling contented and happy. So I settled for mopey as my adjective du jour.

What was making me feel so vexed (there's only so many times one should claim mopeyhood) was there was nothing in the house I wanted to read.


You would think with all these books, there'd be at least one around that would have appealed to me this afternoon. But here's the problem:

The past year or so, I've been reading books pretty much for the sole purpose of getting rid of them. They're books I bought a long time ago, that have been sitting on my shelves waiting to be read, and I've been pretty good of late in reading and ridding. But I've made my way through most of the ones that had even limited appeal to me, and the ones left (no insult intended to them), I think of as homework. So what's on my shelves now are books I know I ought to read so I can get rid of them, books I'll get rid of at some point whether I read them or reread them but what's the hurry, and books I know I'm not going to get rid of, so there's no point reading or rereading them.
﻿﻿
Sometimes, when I'm in this kind of mood, I read a mystery novel by Patrick Quentin, but I did that on Sunday, and I must have read it once before (although I had no memory of it), because I figured out who did it, and ordinarily I'm terrible at that. But a Patrick Quentin novel takes 3 hours maximum to read, and I didn't think I should read another one quite so soon after the first.
Finally, after several hours of stomping and pouting, I pulled Fatal Vision by Joe McGinness off the shelf. See the bookcase with the big German poster on the floor, and the shelf above that has the two black and white photographs of my father? Fatal Vision was on the next shelf up. According to the copyright page, it came out in paperback in August 1984, and my copy is a First Signet Printing, which most likely means I read it in August 1984, and have been thinking about rereading it for the past 29 years give or take. It had been on the No Point Reading Or Rereading Because I'm Not Going To Get Rid Of List, but you know, if it's taken me 29 years give or take to get around to rereading it, maybe a reevaluation is in order.
So far, I've read 44 pages, spent 7 minutes on Google, catching up on the case, and one hour 12  minutes writing this blog entry (including taking pictures of the bookshelves, which was harder than you might think because I'd forgotten to put the memory card back in the camera from the last time I'd used it, so I had to take the pictures all over again).
As Stephen Sondheim once said, "Art isn't easy."
I bet he has plenty in his house to read though!
ETA: Picture of Scooter hogging the bathroom sink when I wanted to brush my teeth and go to bed which was why I forgot to put the memory card back in the camera. 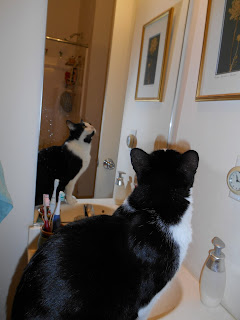 ﻿
ETDoubleA: If any of you can make the connection between Patrick Quentin and Stephen Sondheim without benefit of Wikipedia, I'll be very impressed!﻿﻿
﻿
Posted by Susan Beth Pfeffer at 7:13 PM

I don't get the connection... but I did want to say I have this problem all the time. I have hundreds of unread books, yet sometimes nothing looks appealing or holds my interest.

If you go to the Wikipedia article about Patrick Quentin and read all the way down, you'll find it (and it's an interesting one).

So far I'm enjoying rereading Fatal Vision. And I've found another couple of books I own that I realized I'd like to read!