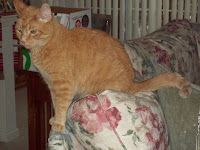 I wanted to say thank you for all the e-mails, cards, and comments I've received since yesterday morning. They mean a great deal to me. I admit I haven't had the fortitude to open the cards, but I appreciate the effort taken to select and send them.

Alexander was a very dear cat. He knew his name and would come bounding into the room if I called him. He also knew Emily's name, and would bound in at that sound as well. He loved furniture, regarding my expensive sofa as his personal scratching post, and my reading chairs as hair shedding resorts. He didn't care who scratched his ears. When my house was on the market a few years ago, he'd follow potential buyers from room to room, on the off chance they might pet him. He never outgrew purring. Although he was a year and a half older than Emily, and considerably bigger, he deferred to her. When I had a house in the country, if Alexander knew I was going for a walk, he'd race down the stairs to meet me outside. Emily would come along also, whining and then wandering off on her own, but Alexander stuck to my side as we'd walk up the hill through the woods.
There's no good time for a pet to die, but Alexander's came at a moment when the past was very much with me. The fifteenth anniversary of my father's death was this month; I adopted Alexander from the Humane Society a few months after my father's death. Last week, two nights in a row (once privately, once with my friends) I watched a videotape I'd made twenty years ago of a party I gave. My father was on the tape, as well as two friends who have since died. I hadn't watched the tape in a very long time, and it felt wonderful to see those people caught in that moment, but it was very powerful as well, to see those people I'd loved and lost.
Last night I divided fifteen into sixty several times, and each time it came out four. Alexander had been my cat for almost 25% of my life. He (and Emily) had lived in all four of my homes. So while much of my grief was for the loss of a specific, beloved, cat, some of it fell into the Margaret Are You Grieving Over Goldengrove Unleaving category. Either way, my eyes still hurt from crying.
_______________________________________________________

A few quick professional notes. While I'm not relishing the flight to Anaheim tomorrow, I am very much looking forward to spending Sunday at ALA. I know I'll be meeting Dawn there, and I hope others of you as well (maybe some of the Anonymouses).
I got an e-mail from my editor yesterday apologizing (because she's a very polite person) for not having read The World We Live In yet. She said it might take another couple of weeks before she can let me know if Harcourt will accept it.
Amazon says they have only two paperbacks of LAWKI in stock, with more, they swear, on the way. I have no way of knowing how many copies they ordered originally (it could have been three), but it's nice to know they underestimated the demand.
I'll get home Monday evening, thunderstorms permitting. Tuesday morning, I'll be getting a phone call from a reporter writing an article on teen apocalyptic fiction for Newsweek. I could end up on the cutting room floor. Maybe the whole article will. But it's still exciting to be able to say I'm going to be interviewed for Newsweek.
Posted by Susan Beth Pfeffer at 7:38 AM

I am so sorry about the loss of your cat. Amazing, isn't it, how they simply are part of the family, lock, stock and barrel?

You, as a writer, might enjoy this memoir, Tatianna ~ Tales and Teachings of My Feline Friend, on several levels. A friend of mine gave it to me as a sympathy gift after the recent loss of our beloved cat Max. Yes, it made me cry, but it also is a healing piece. It's not often that a book centered around a specific animal has such a positive impact on the reader as this one does. This book radiates intense compassion for not just this one creature, but for all life.

Just got back from ten days in Florida and was pleased to have the dead & the gone audio book waiting for me! Thank you, again, so much!

I just finished the book I was reading when I bought d&g so will begin it today. Can't wait!