But Maybe I Wrote It While Sleepwalking

Some blog entries are full of Significant Moments, and some are not.

I just wrote an update at thirdmoonbook, but more to the point, over at the right side of the blog, I put the date (Jan. 2) of this most recent update. I'll try try to remember to do that whenever I write an entry there.

I've been asked on occasion why the Scholastic cover of Life As We Knew It is different from the Harcourt cover. Quite a while ago, I wrote a blog entry explaining how that happened, and for those who are curious, I've added a link to that entry on the right.

My brother, who googles all family members, found our father was quoted at Daily Kos, on Christmas, which was my father's birthday, sort of. Daily Kos is pretty impressive. They have a shop where you can buy stuff with their logo. That is not an option here, since among other things, I don't have a logo.

Speaking of family members, my first cousin once removed Debbie is going to be on Jeopardy on Jan. 12. If she does well, it's because she has Pfeffer blood in her. If she doesn't, she's just a distant relative of mine.

My mother provided me with my first Ember moment of the new year. I called her yesterday afternoon when I discovered there was figure skating on.

My mother is deaf in one ear, and wears a hearing aid in the other. But occasionally the battery dies in the hearing aid, without her being aware of it. If the non-working hearing aid is in her good ear, she's almost completely deaf, which is what happened yesterday. It took a number of tries on my part before she answered the phone at all, and when she did, it was obvious she 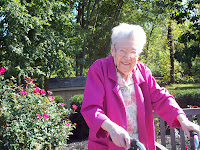 couldn't hear anything I was saying.

"Take your hearing aid out!" I kept hollering, saying Ember Ember to myself.

"Hold on, hold on," she replied any number of times. Then she said those words no daughter wants to hear, "Who is this?"

Finally she told me to hang up and call back in a few minutes. Which I did. By that point, she'd put a new battery in and could hear me fine. She even apologized for the mess, and explaining that it had caught her in the middle of another mess.

"Do I want to know about the first mess?" I asked, and my mother assured me I didn't and never said another word on the subject. Which is why she's such a great mother, and well worth the sore throat I got from screaming into the phone.

I did a New Year's Day google of the dead and the gone, and I found the following. I'm quoting it in its entirety, so you can decide for yourself if I really wrote it or not (my money is on not):


How do you write a fantasy story?
In: Academic Writing, Fantasy

First you come up with an idea. It doesnt have to be very elaborate yet, just an idea about what your writing.
Next you come up with characthers and a plot.
Finnaly you start writing, it really depends on if you can think of the ideas, not the grammar or anything else.
Two great examples of my writing are Life as We Knew It and The Dead and the Gone. By me, Susan Beth Pfeffer

While I certainly agree that two great examples of my writing are LAWKI and d&g, I'm way too modest to say so. Heck, I'm too modest to have a logo.

Finnaly, I hope all you characthers have a great new year. Enjoy yourselves and don't worry about the grammar or anything else!

Posted by Susan Beth Pfeffer at 11:22 AM

Hi Anonymous Santa Fe (and everybody else to whom this applies)-

I don't want comments that include spoilers on blog entries that don't have B3 in their titles.

So please don't take this personally, but I'm deleting your comment.

Thank you for your understanding