I spent Saturday at the Millbrook (NY) Book Festival where in between speaking to librarians and talking on a panel, I heard Jane Bryant Quinn speak about personal finance.
Index funds. Emerging markets. I have to remember to check into those.
She also said that in bad times, the first employees to get laid off are ones with negative attitudes.
I mentioned this to a writer friend of mine who responded that all writers complain and anyone who hires a writer has to know that and therefore should be accepting of it.
Before I forget, Jane Bryant Quinn was fantastic, and if you ever have a chance to hear her, grab it. She definitely has a sense of humor. I know this because after she finished talking, I found at the Millbrook Library Book Sale a 1967 book called Make Money From Stamps, paid 50 cents for it, brought it to her, and she didn't have me arrested.
Back to bad attitudes. For any of you new to this blog, I love to complain. I'd say whining is second nature to me, but it's more like first nature. But lately it's been a challenge to be negative about my career, because things are going so fabulously. Beyond fabulously. In unexplored territories of fabulousity.
Yesterday, as further proof that May 18 is destined for holiday status, I got a package of the promotional materials Carlsen, my extraordianary German publisher, is using for Die Welt We Wir Sie Kannten (aka Life As We Knew It). 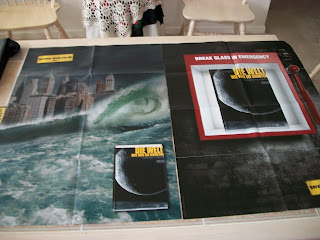 The poster is two sided. I'm hoping I can get it easily framed, and if I can, I'm going with the ocean wave side. The other side has my book (and therefore my name) in much bigger print, but I think the ocean waves are jollier (yes, they're drowning half of humanity, but they look so pretty doing so). The little yellow tubes contain apple juice. I opened up the book bag (with Scooter's help) and turned over one of the postcards, so you can admire the thorough job of promotion. And I think I'm going to take the cover off the magazine and frame that, which will give me the graphic of the emergency box, but taking up less space (don't ask me where any of this is going to go in my den; the wall of ego will just have to expand). 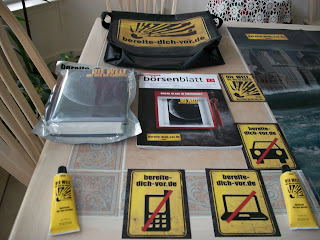 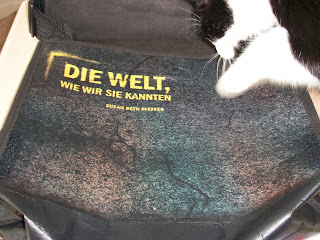 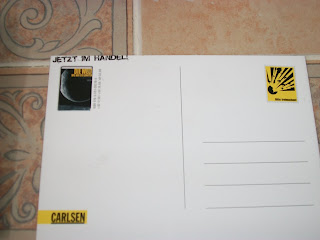 Lest you think only the Germans love me, I know for a fact that Houghton Mifflin Harcourt has some very exciting promotional things in the works, that I'll be screeching with ecstacy about in the not too distant future.
Meanwhile, in the delightful nature of life right now, I'm still in an interregnum period, having completed Blood Wounds, but not having heard from anyone about it. While I would love people to read it and tell me how magnificent it is, it's also a pleasure not to be working on it. Instead I completed spring cleaning and I am now obsessing about buying a flat screen TV.
I hear reception on them is extremely fantastisch!
Posted by Susan Beth Pfeffer at 10:21 AM

The ocean poster, emergency box and provisional supplies are all interesting. I can't wait to see what Houghton Mifflin Harcourt has in store for us.

Hi! It's me, Sunshine :-). Those Germans have all the luck!!A poster of a wave dystroying the shoreline. An emergency box!! I hope that Harcourt makes a bunch of super cool promotions for us. I can't wait to see what happens.

And in other writing news ... I turned in the rough draft of my thesis ... Writing Improvement Through Reading. Looks like I may be defending shortly. Then I can get back to reading nonprofessional literature. WooT

A very merry Thursday morning to Judith and Sunshine and Tim-

I only know part of the promotions HHM (aka Harcourt) has in order, and what I do know is so wonderful that I refuse to believe it's real. If it doesn't turn out to be a fantasy, then whatever is in the works should be up and running by the end of June (or so they tell me, unless it's all a dream).

Oh, I got a frame for the poster that almost fit (I had to bend the top a little bit, but the width was perfect), and I have it propped on the floor, where it looks very dramatic. And I bought a new TV set, although it won't be delivered for another couple of weeks.

So things are definitely moving along!

Why is the apple juice in a yellow tube?
and whats the point of it?

Why is the juice in yellow tubes?
and whats it for?

I've never seen juice in a squeeze tube before, but I think it's like that in case of a world wide catastrophe.

Whatever the reasoning, it's very flattering to know it's a promotion for a book I wrote!

Makes me wish I knew German so I could read all the labels and instructions...

Congrats, Susan. You deserve every bit of recognition you're getting!

Happy Sunday Morning (where I am) Friendly Neighbourhood Bookseller-

I wish I knew German also. At some point, I'll be getting the German audiobook of Die Welt Wie Wir Sie Kannten (aka LAWKI), and I won't understand a word of it, unless they include my name in the reading!

If you post a higher res picture of the loot you got I have a German friend here who'll translate.

Thank you for the offer. I have no idea how to make things higher resolution, but it's okay. Google translates enough for me that I have some idea of what's going on!

hi susan,
guess what my class was doing the same thing by creating items for the book we read i choose your book and i got the highest mark in my grade and my teacher kept it to show other children. I did Miranda notebook, a stuffed toy cat , a doll house of miranda house and i also made a pinata of the meteor hitting the moon.

It certainly sounds like you deserved the highest mark in your grade.

I particularly love the meteor moon pinata. What a great idea!

Thank you for using my book for your project.

Susan, I had to let you know that after that discussion we had at the brunch I got my bookfair and guess what? That HORRIFIC pink cover for "Life As We Knew It" stared out at me from one of the booktrucks. I started laughing out loud and my clerk thought I was nuts. Now that I see it, I really get your aversion to it!

I wonder how many copies Scholastic printed with that cover. Yet another question, I'll never learn the answer to!