I'll start with the announcements.

My car passed its annual inspection.

Granted it's only a year old, so the odds were in its favor, but one should never take anything for granted.

[I just got distracted by seeing a deer eating outside my window. It used to be deer were a lovely, unexpected sight, but now with so much Lyme disease going around, they're the enemy of the people.]

And when I got home, and needed some kind of overshirt (it was 98 degrees less than a week ago, and 68 degrees this week), I found one in my closet I have no memory of buying. Ordinarily this kind of discovery can cause great waves of guilt to roll over me, but the price tag said $14.98, and no doubt I bought it on sale for even less, so the guilt subsided and I put the shirt on. 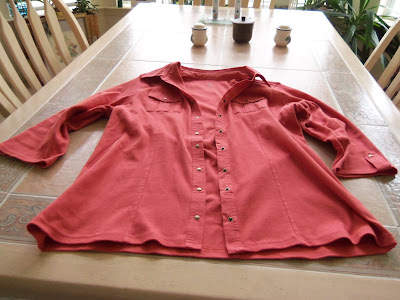 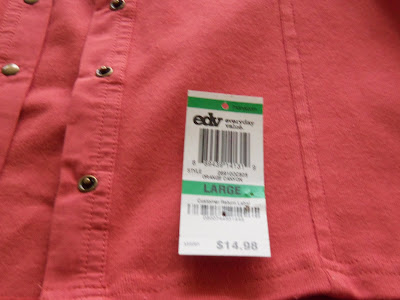 Sadly, the shirt looks better on the table than it looks on me.

As far as professional announcements go, I have none. My editor sent me an email saying if I needed more time to write The Shade Of The Moon then of course I should take as much time as I need. And my agent emailed me to say she was doing what agents always do (she didn't word it that way of course), which was to ask for better terms (presumably more money, since that's what agents always ask for).

Ironically (ooh, two sentences starting with adverbs in a single blog entry), I spent several days last week whipping the material for Shade into shape, and was sufficiently satisfied with my work that I typed up a two page outline of all the scenes I wanted in the book. 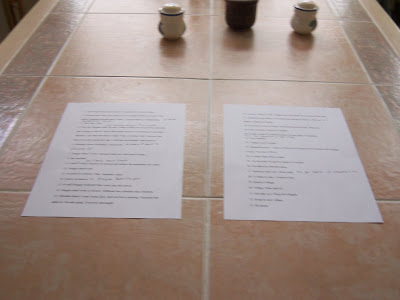 And it's at a point now where the characters are talking to each other in my brain all the time (or at least all the time I'm not distracted by other things), and the step after that is usually writing at a frantic pace (if for no other reason than to get the characters to stop talking to each other in my brain). I even worked out a writing schedule that wouldn't (probably) kill me, and then I figured what with Labor Day being on Sept. 5 (aka my mother's 100th birthday) and my editor most likely not even thinking about reading the manuscript until Sept. 6, well, why not get it done in time for a Fall 2012 publication?

But since I haven't officially (or even unofficially) agreed to anything, there's nothing to announce.

Meanwhile on the assumptions front, my agent hasn't said anything more to me about The Offering, so I have a choice between two things to assume. Either she hasn't finished reading it or she's read it and doesn't like it and doesn't know how to tell me. I love that "doesn't like it" euphemism. What I mean is "hates it with every fiber of her being." I always assume that when I don't hear from someone past the point when I should have heard from them (that point usually being 7.3 minutes after I've sent them the manuscript). I picture the entire publishing industry whispering, "I really hate that manuscript by Susan Beth Pfeffer with every fiber of my being, but I don't know how to break it to her without destroying her frail delicate sensibilities. Oh, I know. I'll send a deer over and she can catch Lyme disease and that will distract her."

Meanwhile, Todd Strasser and I have tickets for the Thursday afternoon Rangers/Yankee game, previously known as Derek Jeter's Last Best Chance To Get His 3000th Hit At Yankee Stadium. Last year, Todd bought the tickets for the game we went to, so this year I did, and it was fun fantasizing about my investment increasing in value. But now that Jeter has an injury, the odds are Thursday's game will be just that, Thursday's game, and while Todd and I will have a great time (especially if the Yankees win), the likelihood of my selling our tickets for vast amounts of money so one of us could retire immediately and run off to Tahiti has diminished substantially.

Oh well. It's probably too warm to wear my new shirt in Tahiti!
Posted by Susan Beth Pfeffer at 3:05 PM

Love this post. I was just lamenting today about not hearing from an agent who requested a full--it's only been ten days and the way I've been behaving you'd think it's been ten years. Good to know even those much more accomplished have similar feelings. Thanks for sharing!

I've lost track of how many people I know (more than 2, less than 2000) who've come down with Lyme disease in the past few months. When it's caught immediately, it seems to be a nuisance, but without prompt treatment, it can really be dangerous.

Great that you can take your time on the book if you decide to do it. And i personally love the phillies. Well in NJ most people love phillys. Guess what? thats where i live so... GO PIGHTING PHILLIES! ( see how i replaced f with p? huh?)

p.s i totally almost died laughing when you said
"I picture the entire publishing industry whispering, "I really hate that manuscript by Susan Beth Pfeffer with every fiber of my being, but I don't know how to break it to her without destroying her frail delicate sensibilities. Oh, I know. I'll send a deer over and she can catch Lyme disease and that will distract her."
it was hilararios

Why thank you BiggestFan! He's very well, I assure you. We did catch the disease in the earliest stage--the bulls-eye rash--and so he's never had any long term repercussions.

And yes, Susan (may I call you Susan?) I also believe those agents should adore our work from the second it clogs their inbox. Thanks for the chuckle.

I'm still waiting to hear from anyone about anything. But I did use the morning productively with a trip to Time Warner (where I actually got two different things done without any waiting at all!).

I love your books I have read them three times. I hoe the 4th book gets published. I cant wait to see what happens to the families. CAG