September First Fell On A September This Year

I am very impressed with September's ability to fight off August's efforts to appropriate a few of its days. Bravo September, plucky 30 day month.

September is always a significant month in the Pfeffer family, since it hosts my mother's birthday (100 years of birthdays to be celebrated Monday Sept. 5) and my brother's birthday, and my parents' wedding anniversary. In addition, my father had emergency open heart surgery on Sept. 7 and regarded that as a second birthday. I used to spend a lot of money in September on gifts.

Speaking of my mother and my parents' anniversary, my job for September is to clear out my mother's apartment. She has made the official move to the Health Center, where people look after her and bring her three meals a day and comment regularly about how cute she is.

Clearing her apartment out is a good stress reducing job for me, since it distracts me from thinking about my editor reading The Shade Of The Moon. My editor had been under the impression that August had an extra 5-7 days attached to it, so she was taken by surprise when the book arrived on schedule.

My new term for The Shade Of The Moon is domestic dystopian, and my new excuse for anything my editor might object to is, "It's all Princess Summerfallwinterspring's fault!" I always like being blameless.

Back to my mother's apartment, which is where I'll be going back to soon enough. We have 30 days minus 2 at this point to clear it out. It's not that bad a job, because my mother had done a great deal of downsizing throughout the years, so it's not like an 8 room house with a hundred years of memories. And there are the hidden treasures that make this sort of job worth doing. I have found over $1.57 in loose change already (I think it was $1.58, but I didn't count the pennies too carefully). We found some kind of silver coin collectible that my brother priced on the open market, and if the market is open enough, we stand to make at least $12 from it. And my mother has an extraordinary collection of slipper socks from her various stays in hospitals. Green and grey are the favored colors.

What I did find are my parents' ledger books from the time of their engagement and marriage. Apparently they wrote down every penny they spent on groceries. Boy, did they use a lot of butter. My mother said she gained 20 pounds that first year of marriage, and now I know why. The ledgers were kept in marble composition books, full of useful information on the back. The English pound sterling was worth $4.86.65 and 24 sheets of paper=1 quire. Who knew? 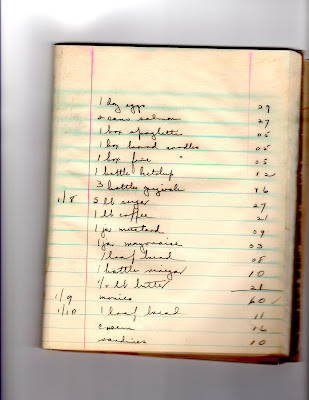 Here's a list of purchases my parents made to set up their kitchen. Notice how they bought two different kinds of can openers and a flashlight. They knew someday their daughter was going to write Life As We Knew It, and encourage those kinds of purchases to people around the world (granted, not including their daughter, who waited about five years after the publication of her novel to buy a flashlight to call her own). 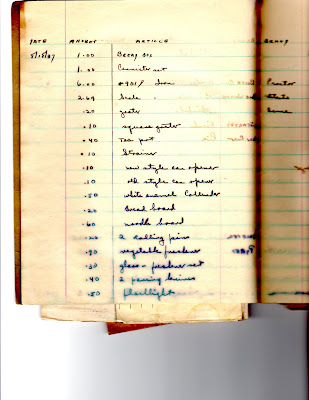 Now if only I could find that 10 cent square grater. I'm certain it could bring in at least 2 bucks on eBay!

Posted by Susan Beth Pfeffer at 10:43 AM

Happy September 1st and congrats on getting the manuscript in on time! I love the term Domestic Dystopian. Or how to cook a boot and make it taste good, like Charlie Chaplin?

Happy September 1 with electricity to you!

Wow, mustard was certainly a whole lot cheaper than mayonnaise, huh? Who knew. These lists are awesome. What the heck is a "noodle board"?

I wondered what the noodle board was also. Maybe my mother made her own noodles, and needed a special board to roll the noodle dough on.

What I find funniest about all the lists is my father smoked in those days (he quit before my brother was born- he heard on the radio that smoking was bad for your health and immediately stopped smoking), but I've only found one entry for cigarettes (and that on a piece of scrap paper). Somehow cigarettes didn't merit being listed (although the movies were).

I visit your blog sporadically and just found out about Moon Book #4 recently. I am so psyched!! My best friend and I are already counting the days until we can hold it in our hands.

Speaking of which, I was wondering if you have any of your books on Kindle? You totally should. Half my books come from Amazon for my Kindle. (The other half from random sale purchases at BAM or a I-must-have-this-certain-book purchase from Gottwal's.)

Oooh, you have the whole Moon series on Kindle!! (And it's called the Last Survivors? Hm, didn't realize you'd chosen a series titles yet. Anyway.)

So I'm a follower from Struggles of a (Maybe) Teen Author, and was also wondering if you do follow backs? I'm trying to get the word about my not-so-new blog with a small following out before my big blog party starts in December. The URL is www.maybeteenauthor.blogspot.com, if anybody wants to drop by. :)

I had to clean my mom's house out a few months ago. My mom grew up very poor and had to leave school at sixteen, something she was so unhappy and embarrassed about. But she did the crossword in the newspaper every day. In the cellar I found her well- worn dictionary and inside the cover were sheets and sheets and sheets of words and their definitions written straight across in her beautiful penmanship. I stood there and bawled

I didn't exactly pick the title The Last Survivors. It kind of picked me. My UK publisher decided to use it and Amazon got it from them. I think the US publisher has used it on occasion since then.

It isn't what I would have chosen, but I'm not real fussy about that sort of thing. I just call them the moon books and enjoy their existence!

I loved the story about your mother. It's always fascinating to me to think of the secret lives of parents, all the things we'll never know about them, and the things we stumble upon that move us or make us reevaluate them.

I also love your devotion to punctuation!

Haha, well I knew you were trying to choose a name a while back. I figured you'd picked that one.

Since it picked you, that probably means it was destined to be that way and there's nothing you could've done anyway. :P

My word today is reeptath. I can't think of anything it looks like, except something from a Lewis Carrol book...

awesome you found that book i love finding old family things. we found my moms 4th grade report card! (sorry i didnt respond to last 2 post was in rehobeth)

I bet your mother did better in fourth grade than I did!