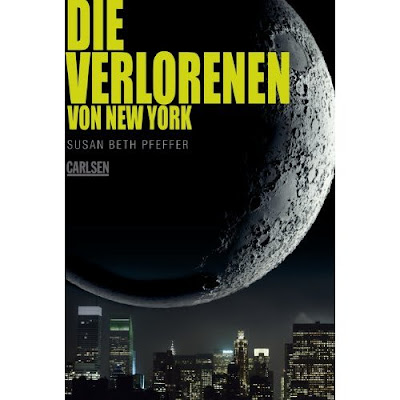 When I checked my emails this morning, I found that Die Verlorenen Von New York (a book I think of fondly as The Dead And The Gone) has been shortlisted for the prestigious German book award, Der Leserpreis- die bestern Buecher 2011, in the Krimi (Crime Thriller/Thriller) category. It is one of 35 books in that category, and the others all look very impressive.

Here's what Google Translation told me, since I still haven't learned German.

Voting for the Readers' Choice Award

Up to 20 November you had the opportunity to nominate a book for each category proposed. The rush was tremendous! Numerous books have earned the title of your opinion and have been proposed - a big thank you!

Among the many entries we have now asked to choose the books that were mentioned most frequently, to be exact, 35 per category.

Vote
You now have the opportunity to 27 To vote in November per category for your favorite book!
Note: each category can be voted only for a book. Think twice before he kicks your voice.

What is the Readers' Choice Award?

On the bestseller lists are books that sell well. Critics prizes books that a jury finds convincing. The reader, however, determine price alone readers, what books they liked this year very well. Join us and become part of our judges!

Why the Reader's Choice Award?

The Reader's Choice Award is a thank you the readers to the authors who enrich with their exciting, touching, entertaining and disturbing stories of our lives.

Books offer fans "The Reader's Choice Award" an orientation, a recommendation by readers for readers who clearly says that in 2011 books are really worth reading.

If you want to see the list and cast a vote, here's the Krimi Category.

And if you're curious about all the books nominated in all the different categories, start here.

Even if Die Verlorenen Von New York comes in 35th out of 35, I'm still delighted it was nominated. And maybe now I'll learn how to spell Die Verlorenen without having to stare nervously at the book jacket (I'm pretty good at the Von New York part!).
Posted by Susan Beth Pfeffer at 8:19 AM

Congratulations! Can we vote?
My word verification is "droun" how apt.

Hello and thank you to Lisa-Marie Jordan and Janet and Ale.

I don't know who's allowed to vote and who isn't. In a rare fit of modesty, I haven't tried.

Anyway, I love that The Dead And The Gone is nominated, but with 34 competitors, I don't think I should brush up my acceptance speech!

Who knows- this could be another chance to visit Germany agian!

I had such a great time in Germany. I'd love to go back someday!

Hey,
I'm 14 and I'm from Germany. I've heard about that price before- it sounds great!
Congratulations!!!
It'd be so great if you'd come to Germany again- I'd just love to go to a reading!
Meggi M.

But I hope to go back to Germany someday. I had a wonderful time there!