For some reason this afternoon I started thinking about the first names of the presidents of the United States.

I wasn't even thinking about Mitt or Newt. Honest. I try not to think about them every chance I get.

No, I think I was thinking about Franklin Pierce, although I have no idea why, since I doubt I've ever thought about him except maybe in 11th grade history, taught by the worst and most memorable teacher I ever had, Big Mrs. White. Although to be honest about it, probably the only thing I remember from 11th grade history was Big Mrs. White (I'm told Little Mrs. White was an excellent teacher).

Back to Franklin Pierce. I thought about him and how ironic it was that there was another president named Franklin, and then I started thinking about all the different first names presidents of the United States have had, and the next thing I knew, I was off to Wikipedia, making a list. 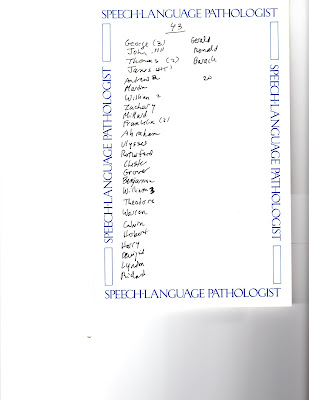 It turns out (thank you Wikipedia) that there have been 43 guys who at some point or another were presidents of you know where. Out of these 43 guys, 20 of them had names unique unto themselves. And it would be 22, or more than half, if Thomas Jefferson and Woodrow Wilson weren't both named Thomas.

In case you're wondering, James is the most common first name, with a big bouncing 6 and then there's John with 4 and George and William tied with 3, and Thomas and Andrew and of course Franklin at 2.

We've had more presidents named Millard than we've had named Matthew, Mark, Luke, Peter, Paul or Mary. One Grover (elected twice) but no Robert. Yes to Dwight, no to David. Hooray for Harry, but hisses for Henry (unless you think of William Henry Harrison as having two first names and I don't). Hello Chester, goodbye Charlie.

Heck. Even if Ulysses Grant got elected president under his original first name, Hiram, he'd still be the only Simon. No Harolds or Harveys.

(We will not discuss the lack of Marys and Lindas and Susans and Hilarys, or why there's a Gerald but no Geraldine, since I choose not to screech in public).

Because of my intellectual curiosity (a friend of mine told me I had that, and I've been enchanted by the thought ever since), I decided to figure out if this quirky name business was more a recent development (in my admittedly lengthy life, there've been 7 presidents with names all their own, and 4 that had to share, of which, sadly, 2 were George). So I whipped out my cute little calculator (kept by the desk so I can determine how much of my money goes to me and how much to my agent), and I subtracted 1789 (our first George) from 2012 (the one and only Barack). I got 223 (I know because I just did again to make sure). I divided it by 2, which is 111.5, in case you're too lazy to get your own calculator.

Now comes the truly terrifying part. I subtracted that 111.5 from 2012, and discovered that the United States Of America reached the halfway mark in presidents in 1900.

I know the Declaration of Independence was 1776, and if you use that as a starting off point, then the halfway mark is securely in the 19th century, where it belongs. But if you scoff at the Revolution and those silly Articles of Confederation, which I never actually learned about because Big Mrs. White didn't teach us that stuff, then the halfway mark is 1900, the very start of the very century at least one of us was born in.

A little more than half (11 to be accurate about it) of the independently named presidents postdate 1900, so it's not all that decisive a factor. Let's hear it for Zachary and Rutherford and Grover.

Hmmm. Now that I think about it, the other most important elected position in the United States, American Idol, has also had its share of unique names. From memory (which I couldn't do with presidents, because I can never remember Rutherford B. Hayes), they are Kelly, Ruben, Fantasia, Carrie, Taylor, Jordin,
David, Kris, Lee, and Scotty.

Forget Mitt and Newt (and how I wish I could). Let's hear it for President Fantasia!
Posted by Susan Beth Pfeffer at 4:26 PM

what are some of your favorite names?
I have always been a big fan of
Evelyn, Lucy, Diane, and Abigail for the girls-
and
Nicolas, Ben(jamin), Arthur, and Frank for the boys.

I'm sorry it's taken so long to respond. I've been nursing a migraine all day.

I don't know that I have favorite names (I'm bad at most kinds of favorites- I like too many things).

I do think Scooter is an excellent name for a cat though!

For the migraine: rosemary tea. 1 tsp. in a cup of boiling water - steep for 10 minutes, covered.

A completely nonsanctioned poll on the other things to think about:

How many fans would enjoy a book centered around Susan's drawings, ie the Bolivian Hat and self-portraits? One...

I certainly wish that some of those names had never made it to your presidents' list and regret that at least one female's (beginning with the letter H) had.

My grandfather and uncle (and a cousin, although I've only met him once) were named Franklin. It's always seemed like a stuffy name, but dignified.

Franklin is a very respectable sounding name. Maybe I should read a biography of Frankin Pierce, since I know absolutely nothing about him (or at least I should make a quick trip to Wikipedia).

I treated my migraine with a box of Entemann's Donuts, half a sleeping pill, and seven hours (give or take various Scooter interruptions) of sleep. I'm hoping to be fully functioning today.

And yes, I do draw an excellent Bolivian hat, but I don't think that's enough to sustain an entire book!

The rosemary tea might well have aided in sleep as well as taken care of the migraine. (sigh)

Of course the Bolivan Hat would be a fine, (even adult), centerpiece for a story with your drawings. It is a matter of changing what messages come out of the hat.

Hello to Anonymous and to Lillian-

Well, I still haven't gotten around to finding out about Franklin (of the dignified names) Pierce, but I did read online an article that says President John Tyler (the 20th president and 3rd with the name John) has two living grandsons, born in the 1920s.

I will look up Franklin Pierce at some point, but between the Austrailian Open, the US Figure Skating Championships, and trying to learn about putting one's books on ereaders, I've been a tad distracted!

Okay, I just looked up Franklin Pierce. He was the one who was good friends with Nathaniel Hawthorne (I vaguely remembered some president was).

He was one good looking president. It's a shame he wasn't much good at it, and that he supported the Confederacy in the Civil War, because he'd be a nice addition to a dollar bill.