Granted, that's not the catchiest blog title ever, but at least it's accurate.

My birthday was a wee bit more complicated than I thought it would be. My friend Carol had a stomach virus, so she opted out of the birthday lunch, and then my mother decided she wasn't feeling up to it either. So Marci and I had lunch, and Marci had bought a carrot cake for me, and she and my mother and I had some.

I also got phone calls and cards and wonderful messages on my blog (thank your for them), and two great presents (a copy of Skating Shoes by Noel Streatfield from my cousin Ellen, and a biography of young Queen Victoria, from my goddaughter, as though her cheeses weren't enough). But the lunch thing was a little disappointing.

Joyce and Lew came up Saturday afternoon, and Lew decided as soon as he crossed the threshold that he wanted to take a nap (one reason why Joyce and Lew are such great houseguests is they like to nap). So Joyce and I decided to watch a girlie movie in his absence. We watched Born To Be Bad, which we both thoroughly enjoyed.

Then Lew woke up, and we had supper (chicken with multitudinous garlic bulbs- it could have used some more salt), and watched Conflict, while eating carrot cake and fudge and my goddaughter's cheeses.

Sunday, Joyce and Lew treated me to the fancy brunch. I had an apple stuffed brioche french toast which was extremely fabulous. The champagne flowed (out of my glass, since I don't drink) and we had a fine time. Except when I backed the car out of the parking lot, I hit a concrete planter, which was clearly made of sterner stuff than my Civic. The body work will get done on Thursday/Friday and will cost more than the brunch did. There's irony for you.

We went back home and indulged in Linsanity (the Knicks won! Yay!- and since I don't much care for basketball, that will probably be the only time you'll hear me cheer for them). Well, Lew and I did, because Joyce napped.

When she woke up, we watched Wild Things, which we all agreed was very silly but we enjoyed anyway. Then we ate leftovers and cheese and fudge and cake and the Zebra Popcorn my editor had sent me for Christmas, and watched Wings and the really great Making Of documentary on the DVD.

Hmm. Either Spellcheck isn't working or Linsanity has made it into the dictionary. I think I'll try it with a small "l." Hold on.

I think it's stopped working. I hope I spelled multitudinous correctly.

Back to the weekend. We ate breakfast out on Monday (conservative, low calorie, good for us, breakfast), and then Joyce and Lew took the bus to NYC, and I went back to the apartment and did three loads of laundry and one load of dishwasher and let the air out of the air mattresses, and, oh yeah, I took a nap.

What can I tell you. Joyce and Lew are my role models.

Meanwhile, Scooter also enjoyed his birthday. He very much liked the flowers that my brother and sister-in-law sent me. 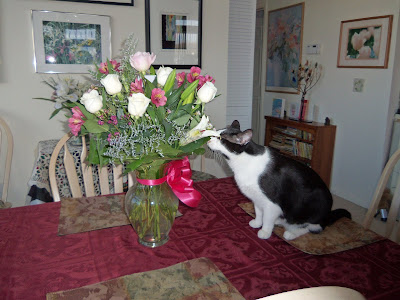 But he especially liked his own birthday present. 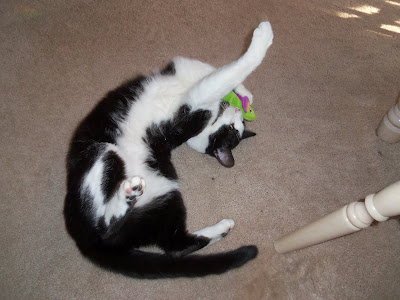 And clearly, Joyce and Lew are role models for Green Catnip Mouse as well! 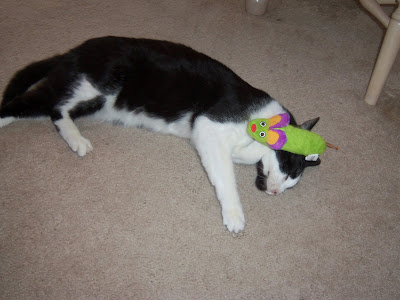 Oh my goodness, Scooter is too cute!!!!!

Scooter and I agree!

when where you born not the year the date thank you