The Space Alien In The Center Is A Vegan

Dinner, to the best of my knowledge, was a great success.

At least no one came down with food poisoning while they were at my apartment.

The curry worked very well in the mashed potatoes, but the veggies needed more flavor. Bonnie, the vegan, put a lot of pepper in them. The raisins were a big hit, so maybe next time I'll use two little boxes. I have plenty in the house.

I think for Joyce and Lew I'll make (watch out-rhyme coming) a stew, which will allow me to use up at least some of the leftover string beans, carrots, mushrooms and garlic. Also I think I'll bake another strawberry rhubarb pie, because it was really really good and I have enough rhubarb for at least six more pies.

Bonnie left before the gymnastics, and Marci left midway through, but Pam stayed to the bitter end, so I didn't get back online until after midnight. When I did, I found that Mrs. Corbett had been nice enough to send me the August School Library Journal art.

I was in Paris once and I saw the Mona Lisa. Forget it. This is real art. 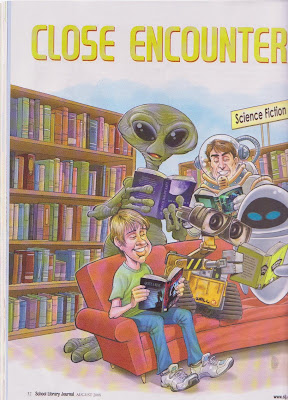 I definitely think my space alien is the best looking one in the bunch, although I'm concerned that he moves his lips when he reads. If you play with the image (or read his lips), you can see he really is reading Life As We Knew It. It says so on the spine. Which, I trust, my space alien has one of.

I got two e-mails from my editor but neither of them were about my current third book idea.

Hey. Maybe I should put some currants in my next strawberry rhubarb pie. I hear space aliens just love that kind of thing!
Posted by Susan Beth Pfeffer at 7:51 AM

Strawberry rhubarb pie is totally justifiable as breakfast. It is, after all, mostly fruit with a little grain (crust) and dairy (whipped cream - you did serve whipped cream, right?) on top.

I want that poster. Maybe if my 6-almost-7 year old sees WALL-E reading, he'll want to read too.

No whipped cream. Vegans don't eat dairy or egg products. No honey either. Nothing that comes from an animal.

Personally, I love whipped cream, and had a great deal of it on my medicinal hot fudge sundae.

I'm off to finish the pie!

I'm loving that alien. He's about halfway through the book! :)

I'm very fond of "my" space alien. He's definitely getting a lot more reading done than I am during the Olympics!

Heather,
My kids are grown, so I'm behind the times--Who is WALL-E?
Patti

I can attest to the excellence of the Veggie Pie and would indeed have eaten the last serving had I not had lunch late (a vegan sandwich, in case anyone wants to know, because my son and daughter-in-law are vegan and I was eating with them)and really did want to save room for the pie, which was outstanding and of which I had one and one half pieces. Yum!

My DIL tells me that they do make soy based whipped "cream" and of course the dreaded Cool Whip is vegan, though not exactly what I would call food, but the pie did not suffer for lack of whipped cream or ice cream. It had sufficient sugar to stand on its' own but not be cloying. Kudos to Chef Sue!

I was afraid of falling asleep at the wheel, or I would have stayed to watch the gymnastics, though I resent bitterly having to watch any beach volleyball.