This Will Not Be The Post About Redecorating My Den

Although I did run out this morning and buy a new desk chair. 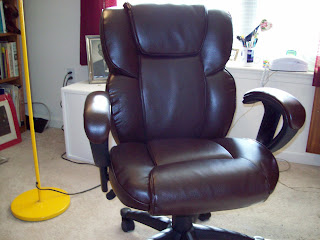 You can see why I wanted a replacement. 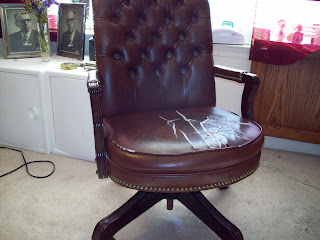 But the real reasons for this entry are twofold. One is to announce that last night at 10 PM, I finished the first draft (yet again) of This World We Live In, with its fabulous, never to be revealed, ending. I worked a lot later than I thought I would because my friend Cynthia dropped by with homebaked hamentashen (yum yum) and my cousin Ellen called for some social chit chat, and American Idol announced not only who made it through semi-final group 3, but also who'd been invited back for tonight's wildcard round (go Anoop go).

And secondly, I wrote a new blog entry with a little discussion of what I may or may not change thanks to my fabulous new ending over at thirdmoonbook, for any of you who are interested.

This afternoon, I bought a new vacuum cleaner, which I had every intention of trying out tomorrow morning, but I'm going to have to take my mother for a semi-emergency visit to the dentist instead. Teeth were not made to last 97 years. After I get her back home, I'll read B3 with pen in hand to make notes about where changes are required. Or maybe I'll clean my apartment and save B3 for Sunday. Either way, I'll make the changes and do the final manuscript polishing next week, and send it off before I go off to Los Angeles for the World Figure Skating Championship on March 22 (go Jeremy Abbott go).

And somewhere between now and then, I'll tell you all about my redecorating!

That is one spiffy chair...but not nearly as spiffy as the yellow lamp! Where can I get one of those?

I am excited that you have finished the first draft of B3, but less excited about the Sept 2010 pub date!

FYI-I went to a middle school today to do booktalks for 120, 7th graders. When I picked up LAWKI, one of the girls sighed and said: Oh. that's my favorite book! I said, it's one of my favorites too! Some days...I really like my job!

PS- Sorry for the deleted comment...I noticed a misspelling and that is just plain unacceptable.

I think the B3 pub date is spring 2010 (unless you know something I don't know, which is certainly possible- the writer is always the last to know).

I love my yellow lamp. I've had it forever, and it's the only piece of furniture I've ever had that I've named. I have no idea why, but I call it Steady Eddie. In this great den redecoration business, I've been paring things down, and I had to choose between a very respectable dignified brass floorlamp with lampshade, or Steady Eddie, and you can tell which one made the cut.

I LOVE the chair. It looks like you could write a 4th, 5th Moon Book from it (or at least lots of blogs and emails). Congratulations on finishing the terrific, albeit completely unknown, new ending to B3.

Hello to Wendy and to Glen-

The new chair seems perfectly comfortable, although no fourth or fifth moon book will ever be written on it. Three is just the right number.

Anoop made it through on American Idol and my mother only had a filling fall out. So all's right with the world.

My makeaword for today is splamp, which kind of fits right into my redecorating (Oh, I bought the most beautiful new splamp).

And now, after the appropriate amount of dawdling, I will clean the apartment. Life is so glamorous around here with or without a new splamp.

My wife brought home a bag of Hamentashen and it is taking all my willpower not to eat every last one of them.

I kind of thought Von Smith would go through to the next round, but other than that, I can honestly say I picked the top 13. I guess it really wasn't hard.

By the way, Shayna got an 'A' on her report concerning LAWKI. Thought you might like to know.

Hope your mom comes home chewing better than ever.

Congratulations to Shayna who has now down better in school than I ever did.

It turned out my mother has lost a filling, so it was a fairly quick and easy trip to the dentist.

And while this is subject to change as the season progresses, right now I'm rooting for Adam (although I don't like his hairstyle).

Hmmm, I thought I saw a Sept 2010 pub date somewhere but I could have totally made that up. Maybe I squished B3's pub date with Catching Fire's pub date (Sept 09). Have you read The Hunger Games by Suzanne Collins? It is amazing (almost as good as LAWKI) and Catching Fire is the next book in that trilogy.

I love Steady Eddie! I wish I had a piece of furniture that cool!

I bet you could have auctioned off the old chair at a pretty profit as being a rare chance for budding writers to put themselves in the seat of a New York Times Bestselling Author, and commune with your writing aura.

You could even have signed it.

But then I would have had to deal with the shipping. And the chair is dark green, so the autograph wouldn't have shown too well.

There's always a reason not to do something, as I've been discovering all morning, when I should have been working on my rewrites!

Hi Ms. Pfeffer (Sorry if you are a Miss or Mrs., but I just put something in between them),
Do you have a cat? Surely sitting on it doesn't do that much damage. I just wanted to know if you had head trauma when you killed Bri. I mean, I almost cried when I read that! I just wonder where Alex and Julie will go next. (I stayed after class and was almost late to finish reading that part. It was so good) Well it is just an update on how the book is going. Thanks!!

I had a cat (actually I had two), and I'm thinking really seriously about getting a kitten this spring. I spend a lot of time trying to decide what I'd name it.

I'm glad you're enjoying d&g. It was kind of mean of me to kill off Bri (especially the way I did). But that's the fun thing about being a writer. You can do all kinds of horrible things you would never do in real life!

your new chair is totily better.

I agree with Dawn on the lamp too.