But actually I'm just hiding in the attic.

Things feel chaotic right now, although my guess is that's mostly self-imposed. The Grand Prix figure skating season has begun, so I'm watching skating on Icenetwork.com. There's going to be a point this afternoon where there'll be skating on the net, skating on TV (the Universal station- my mother just got a cable box so she can watch also), and the Phillies/Dodgers game (Go Phillies! What can I tell you- I've got a fierce crush on the Phanatic). 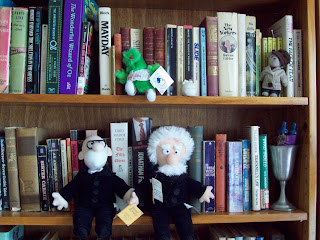 Oh, and I'm going to be on the road for the most part for the next couple of weeks- trips to Illinois (that one is tomorrow) and New Jersey and Texas.

I've had a cold for over a week, an annoying one too, just enough of one so I know I have it, but not so bad that I can't do stuff. Yesterday Marci and I had a theme park day- we went to the Bright Star Diner for brunch and then went to see Bright Star, the movie about John Keats. It was a very pretty movie, but I gotta tell you, I was coughing a lot harder than he was.

I didn't know any of the stuff in the movie (I even thought Keats was 26 when he died, but he was 25), but it reminded me that I went through a stage of reading biographies of the romantic poets and their extended families. I've read biographies of Shelley, Mrs. Shelley, Shelley's mother-in-law, Byron, Mrs. Byron, Byron's half-sister and Byron's daughter. I think I read a biography of a pal of Byron's also, and while I've never read a biography of Harriet Beecher Stowe, I have a vague recollection of how she fits into all this.

I've never read any of their poetry. I don't particularly like the romantic poets. I just like their lives.

Speaking of reading, I'm going to be flying to Illinois and Texas and therefore need stuff to read on the planes (I sometimes think I only read on airplanes). I have four books to choose amongst: The Republic Of Suffering- Death And The American Civil War by Drew Gilpin Faust, Notes On A Scandal by Zoe Heller (I saw the movie), The Devil In The White City by Erik Larson (I read another of his books while flying somewhere) and Consuelo and Alva Vanderbilt by Amanda Mackenzie Stuart (a loan from Marci). And I'll have to buy this week's issue of Entertainment Weekly because it has an article about my favorite Adam Lambert.

So basically the moral of this story is like most Americans, I'm overwhelmed by too many choices.

The advance reading copies of This World We Live In have not yet arrived. When they do, I'll put up blog entries here and over at thirdmoonbook inviting anyone who is interested to email me. I'm 99.99% sure that there'll be more requests than I'll have ARCs, so I'll almost definitely use the lottery system, as I have in the past, to determine who'll get one. Thank you everyone who voted on the polls. It's given me a good sense of interest vs. availability.

Okay. Pairs is about to begin, and I love one of the French teams, so I really need to return to the Grand Prix. When the ARCs arrive, I'll let you know.

In the meantime, stay grounded!
Posted by Susan Beth Pfeffer at 10:59 AM

I know what you mean on the romantic poets. I *love* reading about them. But the poetry itself I'm not all that interested in :)

I should add that my research also includes having seen The Bride Of Frankenstein!

I have a feeling I'm going to make my decision based on how many pages is in each book.

I need something to get me to Chicago and back (2 1/2 hours, plus time at the airport).

Of course tomorrow I can also bring sections of the Sunday Times, so maybe I won't need quite so long a book.

If you're going to Chicago then you must read Devil in the White City about the Chicago World's Fair. It's a very entertaining read about a terrible true occurance.

If you like reading about serial killers, I would also recommend Nemesis by William Bernhardt about Elliot Ness and the Cleveland Torso murders. If you like readinga bout World's Fairs then I would recommend Eiffel's Tower by Jill Joness, a wonderful book filled with quotes and colorful characters of the time (Wild Bill Cody, Thomas Edison, Annie Oakley, etc.)

Me, I'm reading a Spider Man graphic novel then a George R.R. Martin book. After that one of the S.M. Stirling alternate reality novels - not that anyone asked.

And I'm still plugging away on my own novel - How you write as fast and well as you do makes me extremely jealous and happy too as I like reading your books!

You WILL give Texas a kiss for me, won't you? (Deep envy).

I do hope your cold symptoms vanish.

Hi to Glen and to W. Slezak-

I can see past your anonymous disguises.

W. Slezak- I'll do my darndest to give Texas a kiss for you, and with any luck it will be a virus free kiss!

Have fun! Hope your cold vanishes!

I'll be beginning the dead and the gone on Monday with one of my classes.

I haven't read any of the books you have for your trip so have no suggestions. I just finished The Last Child by John Hart and it was so well written. I couldn't put it down.

I read The Republic of Suffering last year and I really enjoyed it, well, maybe enjoyed is the wrong word since the book is about death during the Civil War. I was intriqued by the whole idea and found the book well written and full of fascinating information and even though it was about death it wasn't depressing at all.
Maria Touet

That and the baby laptop make for one heavy pocketbook (and don't forget the actual carrying bag with clothes for the trip).

Scooter's been acting beserk all morning (more so than usual), so I think he wants me home already.

I know I'll have a great time in Illinois, but it will be nice to be home!

Here is a funny figure skating story for you. As I kid, I loved to watch figure skating, and although I don't watch it as often as I used to, I still watch the Olympics and I try to watch some of the other competitions. Well last Olympics I was telling my husband that that evening I was going to watch pairs skating. He asked
"Does Brian Boitano do pairs skating?"
I said "No, he is retired and when he did skate he didn't skate pairs."
"What about Sasha Cohen?" he asked.
"No, she doesn't do pairs skating either."
Finally, he got frustrated and said "Well what is the difference? What is this Paris Skating and how is it difference than figuring skating?!?!?"
I started to laugh, "Not Paris skating, pairs skating, like two people instead of one."

I also like the whole idea of Paris Skating. Paris is wonderful and skating is wonderful, and put the two together, and ooh la la!