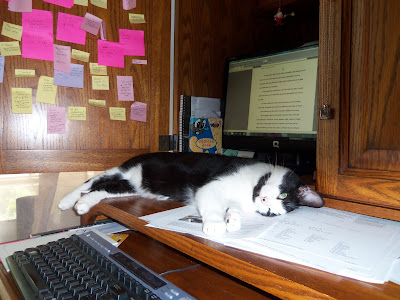 For those of you who don't speak Polish (moi aussi), that means I'm working; I'm working, at least according to Google Translations, which was very excited to see me put something other than German in their translation box.

My agent informed me on Monday that in addition to the wonderful good news of the starred Publishers Weekly review for Blood Wounds (always worth a link), we had sold the Polish publication rights for Life As We Knew It, The Dead And The Gone, and This World We Live In (aka, to me at least, the moon books).

This means the following countries either know now or will someday learn that Lisa is pregnant:

All of them except Denmark bought the rights to all three books, which means I'll be getting 15 more of the moon books in their various languages over the years. I don't actually have room for 15 more books (not to mention Blood Wounds, which will most likely come out in paperback at some point, which'll mean 17 rather than 15), but as my mother is wont to say, this should be the worst problem I ever have.Of course my mother also says I should move into a bigger apartment so there'll be room for the Buxtehuder Bulle when I carry it back from Germany.

Speaking of Lisa being pregnant, I really have been working on The Shade Of The Moon, in which the result of Lisa's pregnancy is a fairly important character. In fact, today while exercycling to the 2002 US National Figure Skating Championships Without Sound (Evan Lysacek came in 12th but they didn't show him on TV), I figured out why Gabe is behaving the way he is. Okay, the real reason why is Because I Said So, but it helps if the motivation is a little clearer than that to the putative readers (or at least my editor). And poof! right in the middle of Matt Savoie's freeskate, I worked it out.

As it happens, because this is summertime when no rightminded freelance children's book writer should be working, I'm letting myself write The Shade in any old order I want. So the first 80 pages give or take are written, but yesterday I skipped way ahead to write a section I didn't even know was going to exist the day before yesterday, and today I'm going to keep going on that section, and then when I return to writing on Friday, return to page 81 give or take. I shudder to think how many pages there'll be between page 81 and the section I'm currently working on.

Speaking of shuddering, my mother who is getting wittier and meaner as she approaches her very own Big 100, said it was perfectly all right for me to be working all summer because my apartment is air conditioned.

She's right about that in English and 7 other languages!
Posted by Susan Beth Pfeffer at 10:49 AM

Your mom makes me laugh! Congratulations!!

Fortunately for my mother and me, she makes me laugh as well!

Congratulations! That is so exciting!

And yay for book progress! I can't wait to read about Baby Rachel. ..er, Gabe. :P

According to Google tranlsations, dziękuję means Thank You in Polish.

Gabe is talking to Juliet right now (or he will be when I get back to work). But he's sticking to English for the time being!

Is that a Rocky and Bullwinkle address book I see by your computer?

Good eyes, Emily. That's exactly what it is!