For Those Of You Just Tuning In 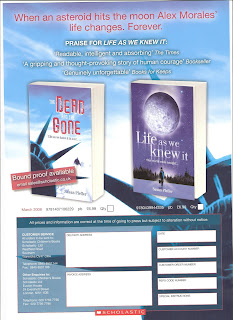 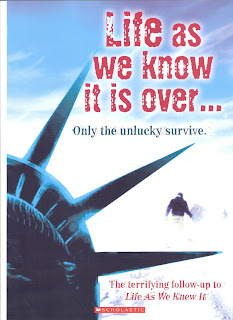 First of all, I want to remind any of you still interested in having your e-mail address put in the Bolivian hat for a chance at one of the three advance reading copies of The Dead And The Gone that Marion Lloyd Books was kind enough to send me, you have until Thursday 8:00 PM EST to use the darling little link on the left to let me know. In case you need further convincing, hovering around this paragraph are the front and back of the Marion Lloyd Books promotional presenter.

My fragile ego and I are pleased to report more than three people have sent e-mails. Thanks to all of you who have expressed interest.
I didn't really have much of a chance to discuss my visit to Bishop Fenwick High School. I had a great time there. The students were terrific, asking all kinds of questions about Life As We Knew It, the process of writing and editing it, and the likelihood of a sequel. While issues of politics and religion were brought up, not a single one asked if I was a New York Yankee fan. Given that my visit took place the morning after the Red Sox clinched the pennant, I think they were remarkably kind. 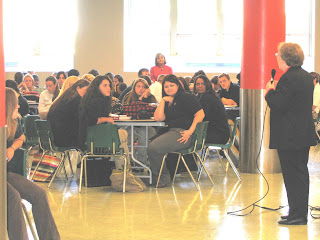 I'm the one with the microphone and the neatly tailored pants suit.
At some point when I have a few hours to kill, I'll write a blog entry about the wonders of my GPS Thingy. But for now I'll only say that I love my GPS Thingy so much I'm considering having children just so I can name them GPS Thingy.
Finally, I'm thrilled to report that Life As We Knew It was named to the Teens' Top Ten list, sponsored by YALSA. I would credit Google with letting me know a mere ten minutes after the list was announced, but actually it was Bloglines that had the scoop. My congratulations to fellow Harcourt author Vivian Vande Velde, whose book All Hallow's Eve (13 Stories) also made the list.

Did anyone happen to record it?

I'm not sure what you're referring to, but if you mean my visit to Bishop Fenwick High School, I don't think so.

If you mean my passionate relationship with GPS Thingy, HBO and Lifetime are in a frantic bidding war.

::chuckles:: Okay, as one of the ones already in the Bolivian hat, please tell us how many have requested a copy. I bet it's more than five! ::grins::

Yeah, sorry I meant if anyone recorded your speech from the high school. Too bad...I thought in this age of computer-saavy techo-yoots, one of them would have youtube'd it...

Is youtube a verb now? (shudder) Time to go scrub my mouth out...

No one recorded it because, *shock* We aren't allowed to have digital devices on during school hours. (and yes, this is a BF student)

It's good to hear from a Bishop Fenwick student. It feels like it was a million years since I was there, but I guess it was less than two months ago.

I need to get a better sense of time, or else the next six months are going to take forever.

Please say hi to me for everyone at Bishop Fenwick. I wear the black overshirt they gave me frequently, and whenever I put it on, I smile from the happy, albeit considerably more recent than I realized, memory of my visit there.