I Got A Kitten. I Got A Bracelet. I Got Another Award! 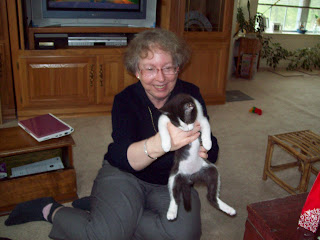 My friends Joyce and Lew were up for the weekend. I was in a particularly good mood, having found out about the Black-Eyed Susan Book Award on Friday afternoon.

Scooter was appropriately cute and kittenish during the visit, and Joyce took pictures. I'm not sure why I'm holding Scooter in such an undignified manner, but that's how we were when Joyce immortalized us.

Saturday afternoon (before Joyce took the picture), we went to the Galleria. We go every time Joyce and Lew visit, generally for shopping and a movie (this time we saw State Of Play).

I had decided the time had come to buy something celebratory for myself. I've had so much to celebrate over the past year or so, and I like treating myself to things when I get good news. My celebratory fantasies of late had involved diamond bracelets, which, oddly enough, many jewelry stores at the Galleria were willing to sell me. I know, because I looked at every single one of them, before spending absurd amounts of money on the first one I saw.

I ran into Lew before deciding to buy the bracelet, and tried it on for him. I asked him if it made my wrist look fat, which is the funniest thing I've said in months. Lew encouraged me to buy the bracelet (my guess is Joyce would have too, if I'd run into her), so I did.

Sometime between six months and six years from now, I'll look at the bracelet and ask myself why I wasted so much money on it. But at this particular moment, it's on my wrist, and I am very happy. As it happens, Scooter is napping on my lap, which would also make me very happy.

See Pink Thing in the lefthand side of the picture? The den doubles as a guest room, so I don't have access to my computer when Joyce and Lew come to visit. This time I thought to take Pink Thing with me, just like I was at a hotel. But while Pink Thing is programmed with many of my favorites, I never bothered to put Bloglines on it.

So Sunday afternoon, upon Joyce and Lew's departure, I went back to the den, back to the computer, and back to Bloglines. And I discovered Life As We Knew It had won the Evergreen Young Adult Book Award from the state of Washington!

No, I'm not going to buy another diamond bracelet to celebrate. But the one I bought is sparkling even more.
Posted by Susan Beth Pfeffer at 1:14 PM

Also, photo does not accurately depict how tiny Scooter is.

Yes, the photograph does make both Scooter and my thighs look considerably bigger than they are!

Congrats!!! Hoora to Life As We knew It, but mostly to the author!!!

What is State Of Play about? I've never heard about it.

I have an idea about the bracelet.U said u would wonder why you spent so much money on it so put the recipt in your jewelry box so when you need the money, return it to get your money back.
-Jill

Yippee on another well-deserved award!!! And enjoy the bracelet - my recommendation is to throw away the receipt and forget how much it cost - just remember what a satisfying celebratory reward it is and will remain!

Feeling so happy for you (even though I have no diamonds...),
Elaine

Hello to Jill and to Elaine Marie Alphin-

State Of Play stars Russell Crowe and Ben Affleck and Robin Wright Penn and is about political scandals and murder. Joyce really liked it, I think Lew liked it, and I would have liked it more if I hadn't been distracted by my beautiful new bracelet and the fact I had lost my MasterCard (which I found Sunday afternoon, and I would explain how and where only I've written books shorter than the saga of the missing MasterCard).

The only other diamonds I've ever owned are a pair of diamond studs I don't wear because I don't think they're sparkly enough. But the bracelet is super sparkly. It reminds me of the Balanchine ballet Jewels. There's a Diamonds section, that is a very sparkly dance.

And as you can see, I'm in a very sparkly mood!