The Long And The Shorter Of It 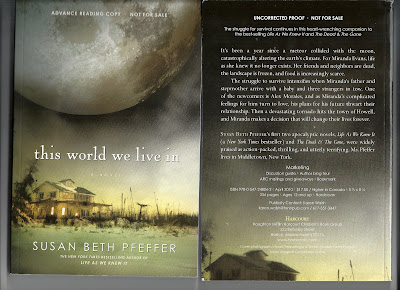 Well, the ARCs definitely exist. I was sent a package with five of them (and a good thing I kept two). That's the front and the back up above. One of the ones I kept is my very own copy.

In fact, when they arrived Tuesday night (my UPS guy comes after 6 PM, which makes every day suspensefilled), I read it from beginning to end. Have I mentioned how fabulous the ending is? I would relay to you my emotional response, but I don't want to spoiler anything.

The other three copies went (in case you were curious) to my friends Janet (to whom The Dead And The Gone is dedicated) and Christy (who was the first person to hear the fabulous ending) and my cousin Ellen. Copy number five I'll give to my mother, who seems to be insistent on getting one.

I've been promised a lot more than five copies, and my guess is the package was sent to me because I've been whining and kvetching about these ARCs for more than a month now. At some point, I'll either get the box(es) with more ARCs, which I will then send to the people whose names get pulled out of the Bolivian hat, or I'll really whine and kvetch. I would do so now, but everybody I'd be whining/kvetching to is at NCTE right now, handing out ARCs of This World We Live In to anyone who is interested (which could be no one, for all I know). I may do some whining/kvetching on Monday, but with Thanksgiving rapidly approaching, no one may be around to ignore me. Or maybe the UPS guy will bring the box(es) this evening. I live in constant hope.

Two other pieces of sort of news. I bought a printer today that can actually scan. The last one couldn't, even though it claimed it could, and then it stopped feeding paper, and it really got upset when I pounded it with my fists. The new one is black and chic and at least it scans. I'll find out if it prints some other time.

And Amazon has changed the date on when TW will be published. No more April 1. Now it's March 31. I see this as good news/bad news. The good news is I won't have to listen to any more April Fool's Day jokes. The bad news is the counter on the right side of the blog, which took me a long time to set up, is now officially wrong.

Hmm...Maybe I should pound on it. Worse comes to worst, it would just ignore me!
Posted by Susan Beth Pfeffer at 4:13 PM

I hope so too!

Such a pretty cover, I love it!

Yay on getting your ARCs. Hopefully more arrive eventually. They look so pretty!

Thank you Ashley and Rebecca Herman!

I started reading LAWKI with my reading-challenged juniors and seniors this week. Each kid picks a date to read and I read the rest (the longer ones, of course!).

On Thursday, we were so into it when the lunch bell rang that they actually "awwww"ed! I suggested we keep on reading instead of going to lunch and for a second I think they were really considering it but then declined. They were all so hungry from reading about food all block!

Anyway, they are enjoying it and I thank you for that! (Believe me, these kids hate reading!)

Have you read 'The Road' yet. To me, it read like a sequel to LAWKI. Years later though ...

i AM so looking forward to see miranda and alex collide, i'm so excited for 2010, so many books are being released, and this one is the one i have to get first!

The suspense is building!!
Who will win an ARC?
Who will have to wait until March 31st (!) to read the book?
What will life be like on planet Earth??
So many questions, so little patience. Need more coffee.
The cover artwork for all three books is really beautiful--frightening and lovely at the same time.
Maria T.

Hi to Cindy and Linda Jacobs and Fear Death By Water and Hailee and Maria T.-

Boy, just typing all those names makes me tired.

The Bolivian hat is quite impatient also.

Thank you Linda Jacobs for using LAWKI with your students. Please tell them that when I was writing it, I always took time to eat lunch (and supper and midday snacks).

And no, Fear Death By Water (your name always reminds me of Natalie Wood), I haven't read The Road. I did see the trailer for the movie though (that's about as literary as I get!).

I will continue to keep my fingers crossed that you receive plenty of ARC's - enough to give me good chances of winning one. March 31 feels a looooong way away!

Well, March 31 will be here a day before April 1 (or so I tell myself), but yeah, there is a whole long winter to get through first.

I'm still ARCless and I really don't know what's going on with them.

But that's no reason not to have a wonderful Thanksgiving. I hope you have one as well!