It's True What They Say About Good Deeds

I am not a noble person. And from now on, I'm not even going to pretend to be one.

I read in the paper that there was going to be a blood drive, and since I couldn't come up with a good excuse not to go, I felt I had to. I've given blood twice in my life, and both times it was a bit of a struggle, but that wasn't going to stop me.

So I bought a chicken salad sandwich at Panera Breads, and went on to the blood drive, in front of our brand new hospital. Our brand new hospital turned out to be quite busy and I parked way at the end, but it's a gorgeous Feb. 1 day (more like April 1), and I was full of noble thoughts.

I went into the There Will Be Blood trailer, had my blood pressure taken (100/70) and answered a lengthy questionnaire, which mostly asked if I'd had sex ever with anybody even remotely interesting. Apparently I answered correctly and since they weren't concerned about my week in Germany or the baby aspirin I take nightly, I was cleared for takeoff.

Takeoff took quite a while, which is one reason why I never give blood. Apparently I have very shy veins (although the blood taker person thought it was because I hadn't drunk enough this morning). Eventually one vein volunteered, and I squeezed the rubber ball every five seconds, and my blood dripped out at a socially acceptable rate.

Next came the part all sensible blood donors anticipate-the eating of the donut. I went to the front of the trailer and was offered orange juice, apple juice, or water. I went with OJ, and checked out the many sweets alternatives. Since I didn't want them to think I had donated my blood just for a donut (although that was true), I selected the small donut rather than the far more appealing big donut. Having treated a mirgraine with a box of donuts last week, I felt obliged to go with small size today.

I give blood and I end up being a Code Blue.

It seems when you faint in a hospital parking lot, they take it seriously. There was much concern over whether I'd hit my head (I said no, but the truth of the matter is, I have no idea) of if I'd had a seizure (again no, this time with even more certainty). They rammed me into a wheelchair and then a stretcher, and zoomed me over to the emergency room.

My blood pressure there was 100/44, which is probably why I fainted, and it was 100/44 because I gave blood. I may not watch Grey's Anatomy, but I have some idea of cause and effect.

It was decided that the best treatment for me was a chicken salad sandwich. They brought me one and I ate half of it, grumbling about the far better one I had in my car. They agreed that a Panera chicken salad sandwich would definitely be better than what they were serving me, but they insisted I eat what was in front of me so I could be cured.

We all agreed I should have had the big donut. Chocolate with yummy crumbs. A definite blood pressure picker upper.

After a while, I hopped off the stretcher and said I was going home. They said I couldn't without discharge papers because then my insurance wouldn't pay. Think about the injustice of all this. I didn't even want to go to the emergency room, and now it would be my financial responsibility.

Eventually the doctor came. He wanted to give me an EKG, but I pointed out I was perfectly healthy and had a chicken salad sandwich waiting for me. I guess that convinced him, because I was given some papers and shown out. I walked the long way to my car (a lot longer now, because I hadn't parked in the emergency room parking lot, not having anticipated being an emergency), hopped in, drove home (five minutes or less) and ate half my sandwich.

I will never give blood again. All you A+ types can find your blood somewhere else.

One good thing came of all this though. I was given my very own hospital ID bracelet, and as a result, Scooter has a brand new toy! 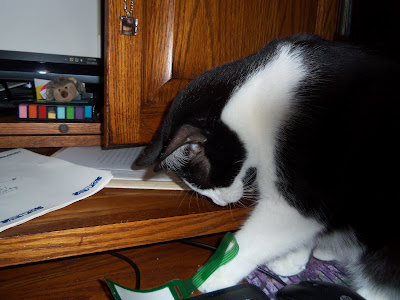 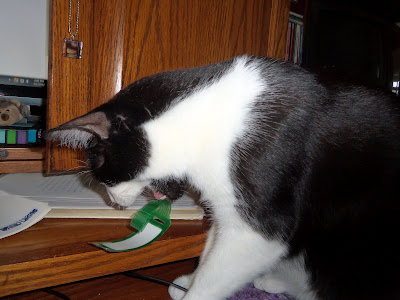 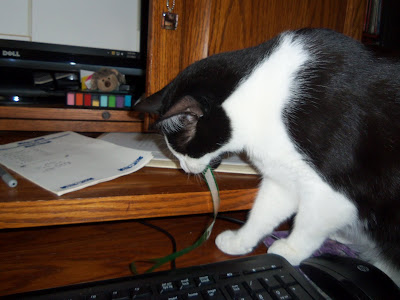 Oh yes, if you faint in a hospital parking lot, they pretty much won't let you leave. And, I just donated blood last week. I'm A+, so I guess my dream of having Susan Beth Pfeffer's blood is now shattered.

Well, grab my blood fast before they give it someone else!

In my generation, all girls were named either Linda or Susan. So I'm sympathetic to the various Emilys out there.

I had half the sandwich after I got home and will have the other half for supper.

I also ate chips and Snickers bars for medicinal purposes!

Your blood pressure was on the lower normal end to begin with. Did you have a decent breakfast before giving blood? Did they ask you that?

Wouldn't take any pills tonight, (if you don't believe me, ask them), nor a bath, and would eat a bigger meal than a half a chicken salad sandwich. And, of course, drink water.

At least now you have a really, really good excuse to never again give blood. Plus, you get points for causing all sorts of excitement.

The last time I tried to give blood they told me I can never give again, just because I had to have a little procedure to fix my heart from going all erratic... (it was some sort of electrical irregularity whose name I've already forgotten, and they froze the spots off via a catheter).

GRRRRRrrrrrrr.... and I was about two donations shy of my 5 gallon pin!

Hello to Anonymous and to Paige Y.-

As it happens, I'd had a perfectly fine breakfast. I once gave blood on an empty stomach (I was young and ignorant), and learned eat first, then donate.

Since my life is on the quiet side (verging on dull if you must know), I like these occasional bursts of excitement.

And it gave the people who saw me faint, something to talk about at suppertime tonight!

Hi Gillian (you slipped in when I wasn't looking)-

I don't even want to think about a 5 gallon pin. The trailer had some very nice stickers saying "Be Nice To Me I Gave Blood," but fool that I was, I concentrated on donuts and not stickers.

A sticker like that would have been a very nice touch in the ER!

Its nice you tried to give blood! I am a real wimp
And would wimp out for sure...count me
Out!!!! Anywho,As they say " it's
The thought that counts!". : )

I'm A+ also, but I don't need blood. I used to be on their speed dial, in case they needed blood in the middle of the night, though I was only called once for that. Since I've had bypass surgery and take all sorts of meds, I rather doubt if they want my blood anymore.

I love it that you "ate chips and Snickers bars for medicinal purposes!"

I am pleased to report that I am still alive.

Not only that, but Scooter this morning was all cuddles and no claws. Usually after 10 minutes of heavy duty purring, he switches over to full attack mode (like the second of the pictures on this entry), but not today. For which I am very grateful.

I love having A+ blood because I was definitely a B- student. But it's not a particularly exotic type (then again, neither am I!).

That's great. I too have a cat that is named shelby.
She has only one eye ( due to a respatory
Infection) and is 8. She still acts like a kitten sometimes,
Who knows why.

Wow, kind of a scary moment! I'm glad to hear you weren't badly injured and they let you leave the hospital!

Because I'm a healthy person, I find this whole episode fascinating. The idea of losing consciousness, not knowing what was going on, is pretty spooky.

Anyway, I'm back to just about normal, and with any luck, someone somewhere is making full use of my blood!

oh gosh, no comment on that! interesting day i take it!
serously i am at a lost for words

I think I'll hold onto my blood for a while longer though!