One Good Reunion Deserves Another

Almost no sooner than I had introduced the German version of This World We Live In to its relatives, the Chinese version arrived. The almost is because there's no mail delivery on Sundays, so the book arrived today (aka Monday). Naturally, I introduced it to its siblings.

Then Scooter wanted to meet it. 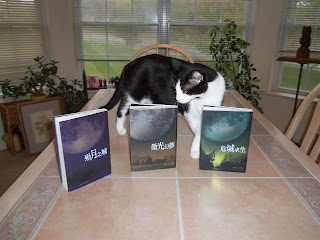 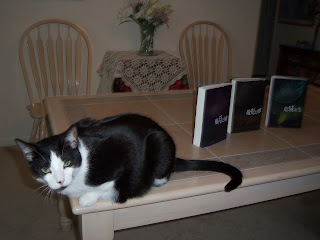 He decided he needed to think about it some more.

While he pondered, I gathered all the different versions of This World We Live In so they could chat. 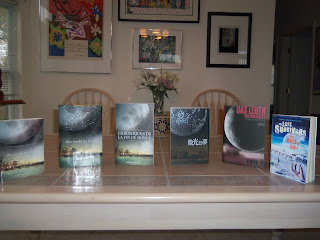 Since I don't speak French or German or Chinese (heck, I barely speak English), I couldn't understand most of what they said. So Scooter, Cat Of Many Languages, obligingly eavesdropped.

Now, if someone can translate Meow for me, I'll know what's going on!

月(yue) is moon, 之(zhi) is of, 城(cheng) is city, translated should be: City of The Moon.

Sorry I don't know the first word from the title of the first book but I am Chinese! ^^y I can't wait for your final installment to be published!

Those are great titles.

To add on to what veyroniqa said, the first character in the first book means 'struck down', 'dead', or 'fallen', so the more complete title is "City of the Fallen Moon".

City of the Fallen Moon is such a beautiful title. I wish I had thought of it!

It may not be too late. Suggest it to your editor.