One Picture Is Worth A Thousand (Crabby) Words

So in lieu of six thousand crabby words, I'll post six pictures from my recent trip to Salt Lake City, Thanksgiving Point, and Provo (I had a great time, by the way, and was treated wonderfully and really enjoyed spending time with Jonathan Maberry, but I'm too crabby to go into details). 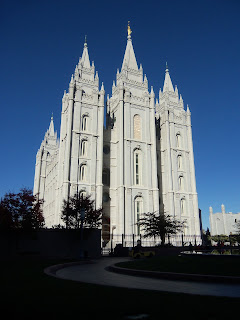 This picture looks so much like a picture postcard that I find it hard to believe I took it. Well, maybe things are a little tilted, but I'm still very impressed. 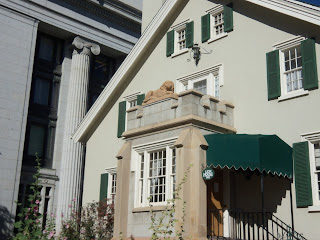 I've forgotten which building this is, although I'm sure it's a very famous one. I took a picture of it because of the lion on the balcony. My father's name was Leo, and I'm very fond of lions on balconies as a result. 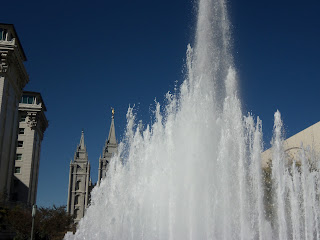 These pictures are from Temple Square in Salt Lake City. I fell berserkly in love with this fountain, but since it wouldn't fit in my carry on luggage, I left it where I found it. 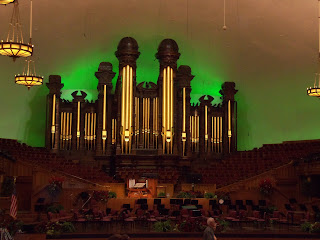 The best unexpected treat from the trip was a half hour organ concert at the Mormon Tabernacle. They change the background colors in case you don't care for green. 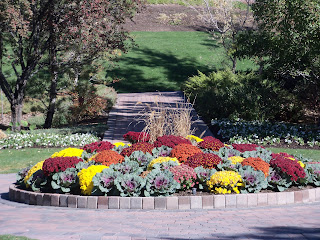 On my way to Provo, I stopped at Thanksgiving Point. The dinosaur museum was so fabulous I forgot to take pictures. But I also went to the gardens. I took a lot of pictures of trees, but you know what trees look like, so here's a picture of flowers instead.

I was taken on two trips while in Provo. One was to Sundance, where I saw a necklace that sadly cost $463.00 and remained where it was (although it would have fit nicely in my carry on bag).

The other trip was to a spectacular waterfall. It was even more beautiful than the necklace. 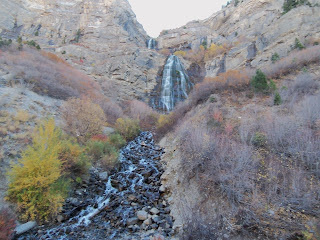 Oh dear. All these pictures are reminding me of the wonderful time I had in Utah. I sense my crabby mood slipping away.

We can't have that. I'll think about those endless six hours in the Salt Lake City Airport, until that  six thousand word crabby feeling returns!

I believe the unidentified picture is of The Lion House, which was originally Brigham Young's home (he was known as "The Lion of the Lord"). There's a cozy restaurant in it now that makes absolutely fabulous rolls!

So glad you enjoyed your visit to Utah.

I really had a great time on my trip, half sightseeing and half work, an excellent balance.

I forgot to mention(because I was so crabby yesterday)the particular pleasure of meeting Emily, who leaves comments here. I've had very few opportunities to meet people who read my blog, so it was a wonderful surprise when she introduced herself.

I'm off to get my teeth cleaned in about an hour. If that doesn't keep me crabby, nothing will!

Here I am! And Susan is right, that's the Lion House, home of the famous Lion House rolls. (if you didn't get any, you can check out the recipe here.

I am glad you had a good time in Utah.

I had a very good time in Utah, but now I'm heartbroken I didn't have lunch at the Lion House. I love good rolls (especially if someone else does the baking!).