What's Been Going On Whilst The Revisions Were Ongoing

I think that Whilst is a nice touch.

I've actually been quite busy working around the rewrites. A fair amount has happened, much of it pretty fair.

I gave an interview to Scripts & Scribes.com in which, among other things, I reveal my addiction to FreeCell (yes, you knew all about it, but now the world's been informed). 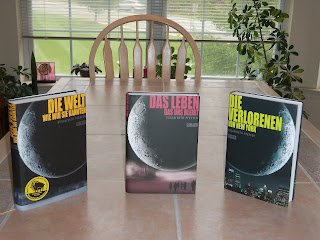 Das Leben Das Uns Bleibt arrived. That's the German version of This World We Live In. Naturally, I introduced it to its German siblings. It was particularly excited to see the Buxtehude Bulle Award Winning Die Welt Wie Wir Sie Kannten. 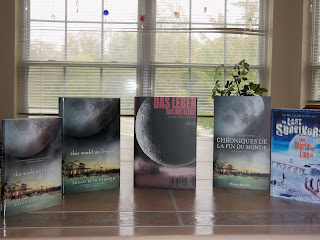 Then I gave a small party for Das Leben Das Uns Bleibt to meet its international  first cousins.

As the youngest member of the Moon family (at least the youngest one with a title), there aren't that many first cousins just yet. But the clan is expected to grow, and more reunions are anticipated.

The paperback of Blood Wounds arrived. 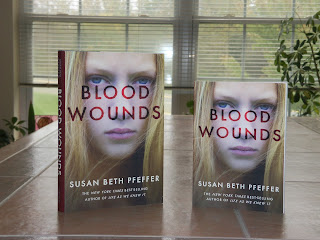 I had actually seen it at a bookstore before I got my copies, and if you look to the link on the right, you can see that many different bookstores have it for sale. 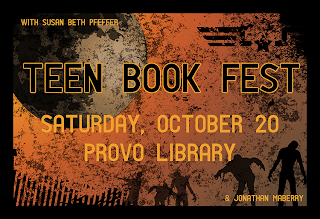 I began preparations for my upcoming trip to Utah, where I will be participating in the  Provo Library Teen Book Fest along with Jonathan Maberry. If you should be around Provo on Saturday I hope you pop in. And if you should be around my apartment this week, I hope you won't break in. I'm going to spend a couple of days as a tourist in Salt Lake City, and I'll be doing a school visit in Provo (the very last school visit I have scheduled), as well as the Book Fest. 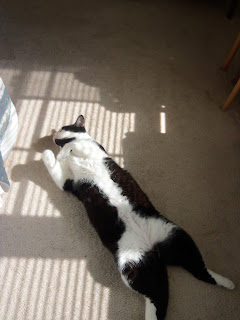 Fortunately for me, Scooter The Vicious Attack Cat is prepared to take on all comers!
Posted by Susan Beth Pfeffer at 12:08 PM

When I get my teaching job in Hawaii I'll invite you the Honolulu Teen Book Fest.

Go get that job. I've always wanted to go to Hawaii!

I had to look viscous up at dictionary.com.

But you're right. Scooter is definitely on the viscous side!

The Provo/SLC area is beautiful, especially this time of year. I wish I was there right now for many reasons (it's still in the 90s here in the Phoenix area) -- so enjoy it for me!

I'll enjoy it for everybody!

I'm in Salt Lake City. Wish I could make to Provo this weekend! Have you been to Utah before? I'm obviously biased, but I LOVE it here!

This will be my first trip to Utah. That's why I've given myself a couple of extra days just to be a tourist!