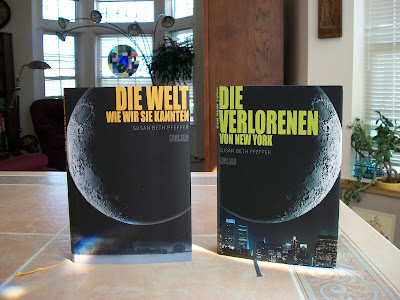 This time of year, writers don't stay home much. We're invited to schools and libraries, where we get to meet really nice people who actually encourage us to talk about ourselves.

So far, I've been to Connecticut and upstate New York and Tennessee and downstate New York. I still have a local library to visit and a school to go to in Arizona. Scooter, by the way, has not liked any of this, and really gave me a talking to when I got home yesterday evening.

While I certainly listened to his complaints (I didn't have much of a choice in the matter), I was also occupied with opening a box that had come from my agent's office. In it, I found four copies of Die Verlorenen Von New York, aka the Carlsen (German) version of The Dead And The Gone.

It's a very striking cover, and a lovely addition to the non-USA versions of the three moon books. 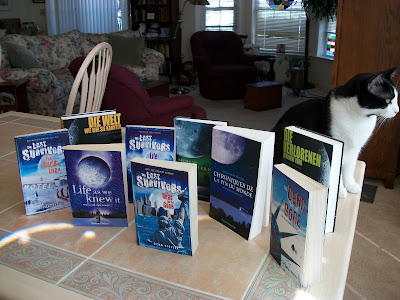 At one of the libraries I visited yesterday, I saw an advanced reading copy of Blood Wounds. It truly was advanced, since I have yet to see one. I assume at some point my publisher will send me one or more copies, but apparently I have to request them, which I'll do tomorrow. If they send me enough that I can spread them around here, I certainly will. My publisher has been very generous in the past, so I can only hope.

Another thing I can hope for is that the Susan Beth Pfeffer Every Book I Ever Wrote And Then Some Bookcase will miraculously expand. It's going to have to, since I already know of fifteen more books and audiobooks that will arrive at some point in this decade. 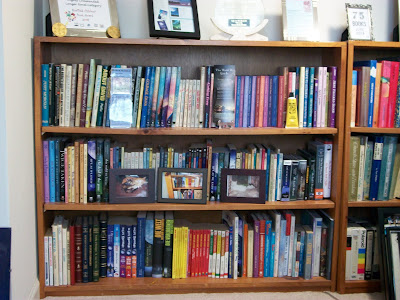 As my mother always says, this should be the worst problem I ever have!
Posted by Susan Beth Pfeffer at 11:17 AM

Your mother is right (she usually is!)

The German edition is somber and striking.

You are truly the World Famous Best Selling Author!

Hello to Marci and to Mr. Cavin-

You may notice, Mr. Cavin, that Marci, who knows me well, isn't suggesting that I need a bikini!

Did you ask the librarian where she'd been to pick up an ARC od Blood Wounds? TLA? I'm surprised HMH hasn't sent you at least one yet, without your having to ask for it. Here's hoping they send you lots, so you have plenty to share! I'm sure we're all eager to read it.

My word verification today is dofented, which sounds very Germanic in honor of your new German edition!

The librarian got it from Baker & Taylor, which, she explained to me, sends out ARCs along with their regular orders (or something like that).

I'm all in favor of Baker & Taylor promoting my books. But I would like an ARC or two for myself.

I'm still waiting to hear from my editor about when I'll get some and how many it might be.

Meanwhile my word verification is "outpr" which given the outpouring of chaos in my life right now seems quite appropriate!