Pick A Number (Almost) Any Number

Every time I sign in to Blogspot to write an entry, it informs me of how many people follow this blog. Follow, by the way, seems like a very weird word to me, but it's the one that gets used here and at Twitter.

Anyway, I've been noticing for a few entries, that this blog has 100 followers, and I've been meaning to thank all 100 of you for showing up, or at least being told when there's a new entry, which I assume is the benefit, such as it is, of following. My Twitter account has 116 followers, and I have minimal idea why, since I still haven't mastered the fine art of Twitter.

1 is always a good number. In this case it's for 1 new interview with me, this time on JMCooper's blog.

I also meant to announce when Life As We Knew It got its 200th review on Amazon, but that came and went as well. I think it's at 204, and since I don't read them, I can delude myself into believing all 204 are raves (although some are most likely raving; LAWKI inspires that kind of response as well).

And speaking of numbers, yesterday I finally analyzed my royalty statement (as opposed to depositing the check which I did instantly), and after adding up the numbers and doing some division based on something I was told by one of the Houghton Mifflin Harcourt people, I can announce that approximately 1/4 of the sales of all three moon books were made by Barnes & Noble. So grateful authorly smooches to them.

Another number in my life these days is 8. That's the number of versions of The Dead And The Gone (do you notice I'm capitalizing that these days? It's because I realized that HMH put This World We Live In in small letters without asking me, so capitalizing D&G is my new form of rebellion)I now have, since I was sent the German audiobook version (aka the German audiobook version of Die Verlorenen Von New York). 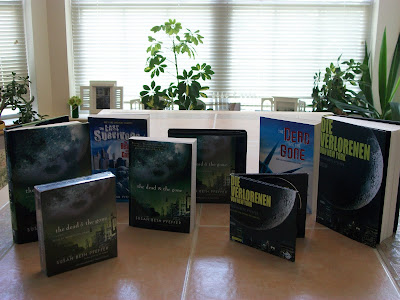 And here's Scooter chewing things over: 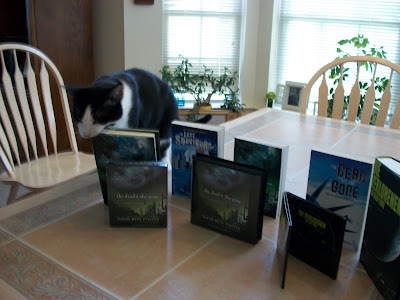 Here's a series of numbers for you: 4, 2(1.5), 4.5, 8. The 4 represents the 4 fan letters HMH forwarded to me that arrived on Saturday. Two of the letters had been sent me mid-April (a month and a half ago). One letter was from February, four and a half months ago, and one was from October, eight months ago. I answered all four letters yesterday evening and made a point of mailing my responses this morning, but this particular quirk of HMH drives me crazy. How much effort can it take to forward a letter? Kids write them, for goodness sakes, and who wants to disappoint a kid? If there are any teachers out there, please understand that publishing houses can be absolutely awful in forwarding letters (or at least HMH can be; I don't remember things being quite so bad at other publishing houses), and consider letting your students email formal letters to me instead. When I'm on top of things (which I grant you, I haven't been lately), I answer emails within a day or two, but at worst they get answered within a week. None of this 4-8 months business.

One final number, 5. That represents 5 AM, my new wake up and think about The Shade Of The Moon time. I can't even blame Scooter, who isn't waking me up. Nor can I blame HMH, which certainly has offered me no assurance that I should be thinking about it, rather than sleeping until a far more decent hour. It's all my imagination's fault, and my imagination and I would both appreciate getting definitive word from my editor, so I'll know whether it's useful for me to be using my brain or whether I should simply turn over and sleep the happy sleep of the semi-retired.

Otherwise, instead of being semi-retired, I'll just be semi-tired. Not knowing is clearly doing a number on me!
Posted by Susan Beth Pfeffer at 1:21 PM

Ok, so with this long weekend with no plans guess what I did.... Read Life as We Knew it strait through on Sunday night. Didn't even realize the time till it ws past 3am and figured I had stayed up that long, I may as well finish the most fantastic book. Then I just had to go out and get the dead & the gone which was equally fantastic, just finished it. And now so happy and so mad at the same time because I really want to find out NOW what happens with A & M in this world we live in, but I must go to sleep and not stay up till 5am like last night as my alarm goes off at 530am

So what I am trying to say is, LOVED them, can't wait to start the 3rd tomorrow. I am happy I didn't discover them until yesterday. It is such a bummer when I get into a great book and then have to wait for the next :)
I really hope you write the 4th.
Becci

Happy Tuesday morning Your Youngest Bigges Fan! and becci and thank you both for your comments-

I don't read before going to bed, just in case it's one of those involving books you don't want to put down. And I'm very glad my alarm doesn't go off at 5:30 AM. Scooter The Alarm goes off at 7, which is much more civilized (and cute!).