Wait Till The Sun Shines Susan 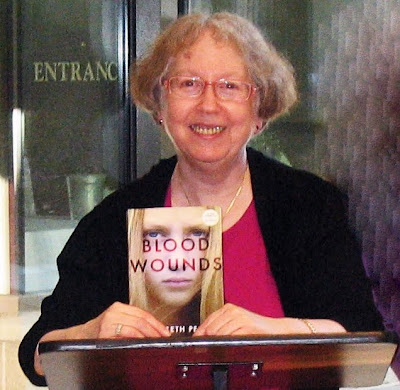 See how happy I look? The picture was taken at the Nyack Library, where I saw the only known advanced reading copy in captivity of Blood Wounds. My own ARC (or ARCs as the case may be)is but one of several things I'm currently waiting for. But since I am an extremely impatient person, it's the thing I'm currently waiting for whose lack thereof irritates me the most.

Not that the lack thereof of the other things I'm waiting for won't irritate me soon enough, and probably even worse.

Let's see. First off, I'm waiting for the sun to shine. This has been the worst spring ever and since it follows one of the worst winters ever, it's especially annoying. Three solid months of January followed by three solid (or really liquid, the way it keeps raining)months of March. I am not, by the way, the only person who's noticed this, but if everyone else wants to complain, let them complain on their own blogs (ooh, I love it when I'm whiny).

Then there's my royalty check. Now my royalty check will come, and since I have a very approximate idea how much it'll be, it's more amusing that irritating that it hasn't come yet. Amusing because my publisher, who generally speaking is wonderful, seems to think the month of April lasts 45 days, which at this point I wouldn't mind, since 45 days of April would be an improvement over 90 days of March. Anyway, the check will arrive circa May 20, since that's the circa it's arrived on the past couple of years. Just think of it as April 50th.

Another thing I'm waiting for from my publisher is a decision about The Shade Of The Moon. You wouldn't think it'd take them too long to read a two sentence synopsis, but I did cram a lot of words into those two sentences, and maybe they had to look some of them up in the dictionary. Oh well. That decision involves the spending of money on the publisher's part, and that always slows things down (which is why they think April has 45 days).

Lastly, and this one is going to take forever, I'm waiting to hear what my agent has to say about The Offering. I gave it a final polish yesterday and emailed it to her. But given that the two previous times I mentioned The Offering to my agent, she never responded (not even with a "You're crazy," or "Well, that's gonna be a stinker"), I can't even fantasize (and I'm naturally gifted at fantasizing) that she's going to drop everything to read it. Or drop anything. Or read it before the sun shines, assuming the sun ever shines again, which it won't so she won't.

I tell you, if there was a Nobel Prize for crankiness, I'd be a multiple winner!
Posted by Susan Beth Pfeffer at 1:57 PM

I don't know, Susan, from where I'm sitting you're doing pretty darn good.

Ah Glen, don't tell me the weather is better where you are!

I really really really hope your publisher gives the go-ahead on The Shade of the Moon! It's one of my favorite series!!!! I'll be the first in line for it! :)

Thank you Glen for my petite moment of triumph, and thank you Tara for your support.

I hope my publisher gives me the go ahead on The Shade Of The Moon also. I've certainly devoted enough brain cells to it (although I admit I'm thoroughly enjoying the process, whether it pays off or not).

Ooh, my word verification is "genesset." Take that sci fi writers and do with it what you will!

I think we are all in the mood for some weather complaining. Seriously, when will spring be here or are we just going straight to summer?

I'm not a big summer person, but at this point, I long for it!

P.S. My word verification is "wound"! How weird is that!?

I can never argue with pictures that look like me, even if I wished I looked like someone 20 pounds lighter (and just maybe 20 years younger).

And yes, that is one weird word verification coincidence. My current one is "adigal." I guess you adigal and subtractiguy!

You could self publish! Pubit from Barns and Nobel... If it doesn't work out with your publishers, a lot of people would still love to read your books.

That book looks so great in your hands, Susan--can't wait to get it in mine!!!

I can't believe Ms. Agent hasn't even touched base with you on The Offering! Oy. Here's hoping that means that she's putting together a great plan of action to get your book into a bidding war...

Thanks Anonymous and the ever cheering superior Susan-

My word verifcation is "relathe" which obviously means I should breathe slowly and restfully when thinking about my relatives (i.e. my mother). Good advice, Word Verification!

Tara ... you'll need to be in line behind me for that book. So the best you can hope for is second place in line.

I am board certified apacalyptic junkie.

I hope it all goes your way Susan.

It's even been raining too much in Wyoming, which is one of the driest states I've ever lived in! Remembering New York's potential for rain (from both times I lived there!), I'm not surprised you're having a dreadfully liquid spring...

Love your analysis of royalty payments on April 50th...

Here in WY I'm hoping, hoping that your retirement books, both The Shade of the Moon and The Offering are snapped up before you get that royalty check! Then you can enjoy the mass celebration that we'll all be in on for you!! And I hope your box of ARCs arrives even sooner, so we can all put our names in for one. : )

My word is upduck - which I suppose is the result of lots of rain on bodies of water filled with ducks? Either that or simply an oxymoron...

Can't wait for the ARCs to arrive so you can dust off the Bolivian Hat!

My word verification is uncomm. You are all extremely uncomm(on) and very special in my eyes!

I'm hoping for good news on The Shade of the Moon!

Do you publish your travel schedule anywhere? I'd love to catch a reading somewhere in the midwest.